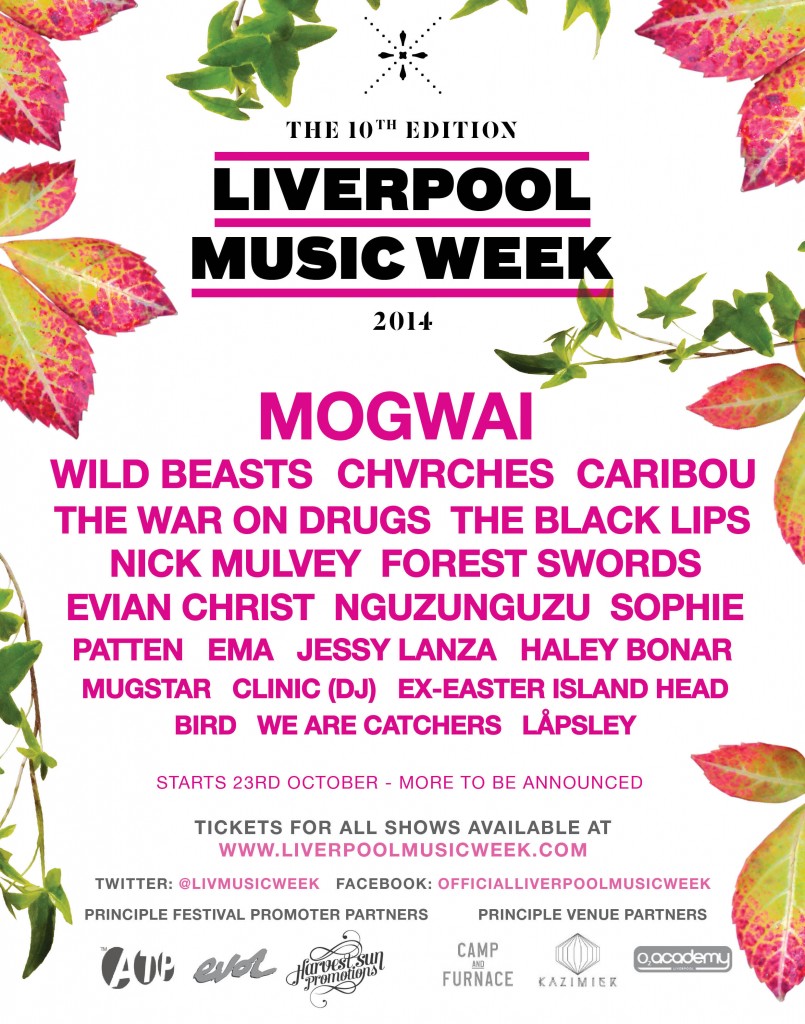 Hosted in the cities revived cultural hub the Baltic Quarter, Liverpool Music Week has announced the first acts for their celebrated Closing Party, on November 1st.

New venues, art studios and derelict spaces will be brought to life for a one large anniversary celebration to close the 10th edition of the much-loved music festival. Running from October 23rd and culminating with the Closing Party on November 1st, Liverpool Music Week’s 10 days of events represent the UK’s largest indoor winter music festival.

With more acts to be added, Glaswegian band CHVRCHES will headline the Closing Party on November 1st at Camp and Furnace, their debut in Liverpool following their huge debut record “The Bones of What you Believe” shot them to stardom in 2013. Atlanta’s Black Lips make a welcome return, and new Radio One sensation Nick Mulvey – founding partner of Portico Quartet – plays his first show in the city following a Pyramid Stage appearance at Glastonbury. 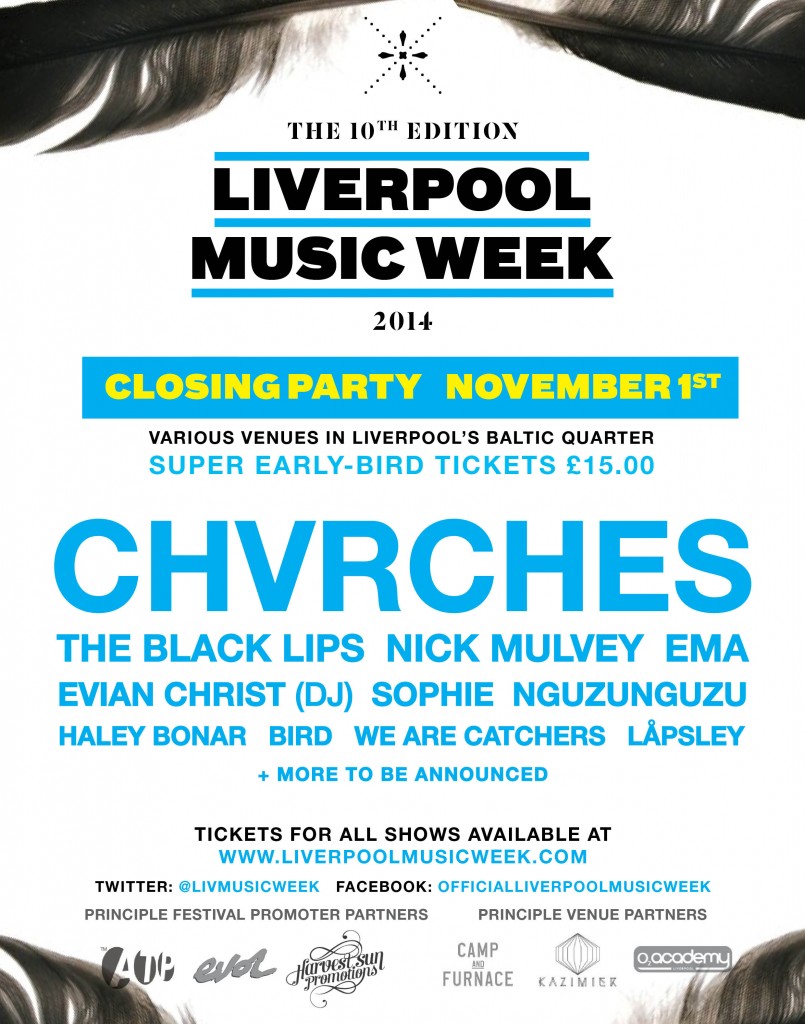 The event starts at 4pm, across the Baltic Quarter venues, and includes a late night programme of the very latest in cutting-edge electronic music talent with Evian Christ (adding a DJ set to his previously announced LIVE AV debut show w/Caribou),  SOPHIE, Nguzunguzu and EMA.

The cream of the local scene will also feature in the Closing Party, the super-hyped 16-year old producer Låpsley, Domino Record’s new signing We Are Catchers and one of the cities most talked-about new acts, Bird.

CLOSING PARTY VENUES – Confirmed venues for this year’s Closing Party are Camp and Furnace, The Blade Factory, Constellations, 24 Kitchen Street, District, The Nordic Church with more venues and spaces in the area to announced.

“It’s a tough act to follow on previous Liverpool Music Week Closing Parties – so we’ve been working hard on the concept and headliners for our 10th edition’s flagship event, and we are now very excited to announce the first wave of acts for this year’s finale. We will be taking over Liverpool’s most exciting new quarter for one day only, celebrating and embracing the city’s new cultural community with a marathon of exciting gigs and commissions in the area’s new venues and unknown spaces. If you’ve been at any of our previous Closing Parties, then you’ll know to expect a serious mind-bending musical extravaganza.”

ABOUT LIVERPOOL MUSIC WEEK, and the venues:
Liverpool Music Week, is the UK’s largest indoor winter music festival, and will be staging over 50 events and 250 live acts across key city venues. The event centres around the Camp and Furnace and The Kazimier, the city’s two main art & music venues that have received national attention for their own significant contributions to Liverpool’s cultural landscape.

Camp and Furnace, with a serious reputation for world-class food, art and music events will play host to the headline shows for Mogwai, Caribou and Wild Beasts. As well as the hosting the main stage for the festival’s notorious “Closing Party” on November 1st, the line-up for which will be announced in July.

The Kazimier will for the first time, provide the main “Festival Hub” – one of the most popular features of Liverpool Music Week  – a series of free and discounted events over a 7 day period. Including, an exciting and diverse line-up of national and international acts to be announced in August, alongside the city’s freshest new talent,
Attracting a record breaking 48,000 people for its last edition, this year the festival returns with a jam-packed 10 day itinerary of live music, one of the biggest musical events the city has ever seen. Partners in previous years have included MTV, BBC Electric Proms, Liverpool Biennial and Sennheiser.