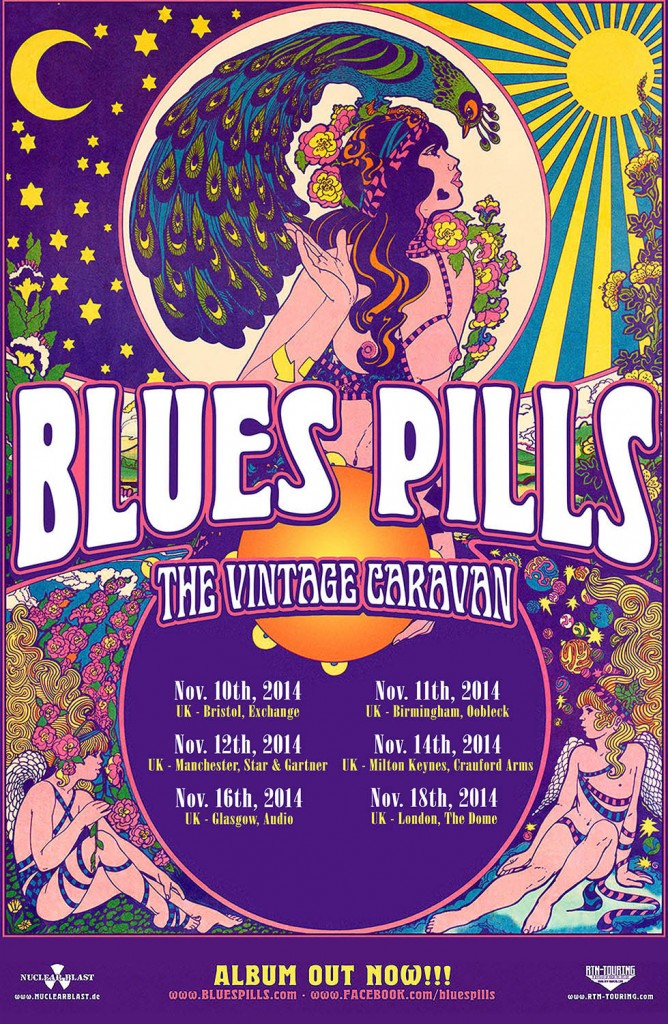 Sweden’s blues rockers Blues Pills have just announced a UK-wide Tour for this November – following the UK release of their debut album ‘Blues Pills’ which is out today and available to buy here.

The young quartet made up of American-Swedish-French members will be gracing The Dome at Tufnell park in London on Tuesday 18th November, as well as playing a number of dates scattered around the UK which will be the band’s first UK shows outside of London.

Blues Pills cannot wait to bring their colourful mix of soul and blues to the UK:
“We are doing a string of dates in the United Kingdom this November and we are beyond thrilled!  Its our first tour over there, and its going to be great.  We can’t wait to tour supporting our new album, in the land of so many of our heroes. Looking forward to making some new fans and friends! ”

Support comes from Nuclear Blast label mates, The Vintage Caravan.
The Icelandic trio toured the UK with Grand Magus earlier in March of this year after the release of their well received debut album ‘Voyage’.
“We are confident that this tour package, with the mighty Blues Pills and Vintage Caravan will be fucking wonderful! We cant wait to come back to the UK, we were treated so well there on our last tour in March. Can’t wait to see you all!” – Óskar Logi – The Vintage Caravan.

Blues Pills recently showcased their debut album with an intimate sold out show at St Pancras Old Church. The prestigious church famed in pop for its heritage with The Beatles has been around since the 18th century but is believed by some to date back to  AD 314. They’re currently touring the album around Europe.

‘Blues Pills’ was produced by the renowned and respected Don Alsterberg (GRAVEYARD), and the cover art was created by artist Marijke Koger-Dunham. The piece was originally painted in the 60s and never used – so with a slight adaptation to contain the Blues PIlls logo, this kept with the bands authentic, but youthful take on the richness of sixties soul and psychedelia.

‘Blues Pills’ has taken the UK press by storm:
‘One of the most exciting album releases of the year so far. Just what the doctor ordered’ 8/10 Classic Rock
”Thank feck for Blues Pills who’ve emerged like a fresh pressed 45 brimming with authenticity and sun-bleached Woodstockian sound.’ 4K Kerrang!
‘What makes this such a big deal is that it sounds like Blues Pills, not a throwback to a classic regime.’ 8/10 Metal Hammer.