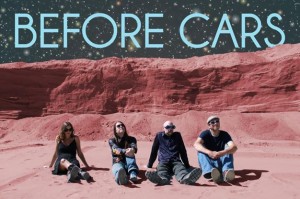 Original Nirvana drummer Chad Channing, best known for his work on the band’s debut album, ‘Bleach’, has announced two exclusive London shows with his new group Before Cars. With influences that include Young Marble Giants, early David Bowie and obscure hits from the 60’s/70’s, the band present an eclectic mix of styles that range from deep and introspective to quirky and light hearted.

Before Cars have released two albums to date, including the recent ‘How We Run’. These London shows are the ONLY UK dates that the band will be playing.

As special guests, Chad has teamed up Killing Joke keyboard player Reza Udhin, who will be debuting his brand new project, Black Volition. Described as a soundtrack to ‘Twin Peaks’ crossed with 1960’s Spaghetti Westerns, influences include artists such as Chris Isaak, Jace Everett and Lana Del Rey.

Joining Reza on vocals will be guitarist Will Crewdson, who is best known for his work with Rachel Stamp, Adam Ant, Bow Wow Wow, She Made Me Do It and more.