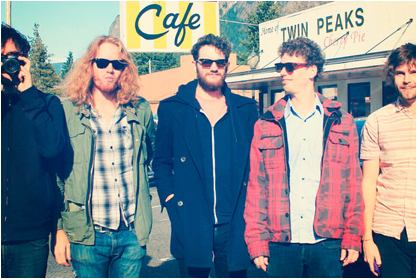 Full Time Hobby is thrilled to announce the addition of Brisbane band, The John Steel Singers to their roster. The band will be playing shows throughout the UK in May, including appearances at The Great Escape and Liverpool Sound City.

WATCH THE VIDEO FOR FIRST SINGLE ‘HAPPY BEFORE’

If ever the phrase “build it and they will come” was relevant to a band, Brisbane’s The John Steel Singers would be it; ‘They’ being the jams that make up the group’s stupendous new album Everything’s A Thread. To ‘It’, being the makeshift-studio which the band constructed in a 70s-build house owned by singer Luke’s parents, overlooking Mount Coolum on the Gold Coast of Australia.

From the moment Luke’s dad suggested nailing acoustic foam to the ceiling, they took the idea and ran with it. Attempting to capture a groove in the spirit of krautrock pioneers Can and Neu!, the Singers adapted every inch of their surroundings into a unique jamming space which lead to Everything’s A Thread’s fluid arrangements, variation in dynamics and miscellaneous texture. “Luke found an organ on the side of the road, Tim’s friend sold us a keyboard for crazy cheap because he thought it was shitty and now I love it more than my own non-existent children,” tells Pete. “Experimentation is good for making you relaxed. We jam a lot and those moments are some of the best in our lives.”

Like all the best coastal albums it’s brim with sparkling, sun kissed sounds, but here the band’s creative freedom equally allows for lurking in the shade. Moving from the hook-heavy pop numbers ‘Happy Before’ and ‘Common Thread’ to the sinister sound of ‘The Marksman’ and soulful yet strange vibe of ‘There’s a Bird’. The Singers move from playful harmony filled summer nuggets, to electronic sheened pop, psychedelic sea shanties, kraut-pop and hard riffing cosmic rock with ease, evoking an uncanny vibe like mist resting on the ocean just before sunset. “Nicolas knew how to declutter the shit we had recorded to give the parts space” says Pete of mixer Nicolas Vernhes (Deerhunter, Fiery Furnaces) giving the record its clarity in sound.

Also accompanying the group’s first ever release in the UK will be a Everything’s A Thread’s live bonus disc, The Go-Between’s Robert Forster appears on extra track ‘Strawberry Wine’. After the band found themselves playing alongside their hero during a bushfires and flooding benefit event, they became firm friends and the Singers soon became his protégés with Forster producing some of the band’s early music. Forster even asked some of the Singers to be members of his live band whilst touring solo.