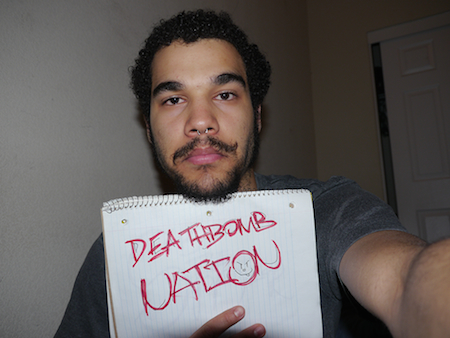 “This dude’s got too much talent to be hanging in the underground too much longer, seriously.” – The Needle Drop

Signor Benedick The Moor’s debut album ‘El Negro’ is out today on cd & digital through Deathbomb Arc Records. To celebrate, a new video for the album track “Lecherous, Senseless, Debauchery” has been released.

Combining virtuoso rapping with his background as a multi-instrumentalist, Signor Benedick The Moor creates music that effortlessly taps into the sound of many genres. He has well earned the reputation of being a prog-rapper! The theatricality of his Shakespeare referencing name reveals itself most in his complex, lengthy, and heady compositions. Making an impressive debut at the age of just 19, he quickly began working with the roster of musicians at Deathbomb Arc. ‘El Negro’, his debut album, sees it’s first physical release via the label, now including a bonus track “h8 everybody [Enter the Black Prince]. The track is one of the live show favorites (in large part thanks to it’s sing-a-long properties), and explores a rare territory for rap: a love of The Cure!

clipping. (Sub Pop) recently announced that they are working on collaborative tracks with Signor Benedick The Moor that will drop this summer. In addition, he also works in the rap group True Neutral Crew alongside Daveed Diggs of clipping., Brian Kinsman of Foot Village (Fat Cat, Not Not Fun, Northern Spy), and Margot Padilla of I.E. (Deathbomb Arc).

“impressively widescreen, big and brash and cinematic, the sort of thing you might hear accompanying a panoramic scene in a movie blockbuster.” – The Guardian UK

“an uncategorisable, genre-jumping trip, woven at home with impeccable detail and instant likeability.” – The Quietus