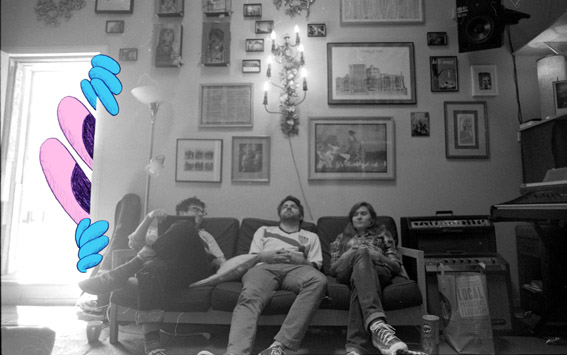 “The bass is dewey. The harmonies are starlit. The theremin is ripe…The racket they’re able to muster together in the process is enough to set them apart from the pack.” PITCHFORK

“…it went round and round in my head for more than a few weeks, and kept me humming and hooked.”  CARRIE BROWNSTEIN

“…probably not too far off from what [Brian] Wilson’s been attempting for his entire career.”  FADER

“It’s that purity of heart and mind that Secret Cities possess, and it’s channelled to create beautiful chamber-pop that bursts with gorgeous melodies. MUSICOMH

Walk Me Home is the third album from Secret Cities and follows their acclaimed 2011 release Strange Hearts and 2010’s Pink Graffiti.   Recorded in 10 days at SF’s Tiny Telephone with Jay Pellicci (The Dodos, Deerhoof, Erase Errata) manning the controls,Walk Me Home is the result of the most spontaneous, democratic, and visceral recording of the band’s life.

Listen to their new single, ‘Paradise’ on Pop Matters HERE.

Watch the recently released video to ‘Bad Trip’ on Stereogum.

Started by Marie Parker and Charlie Gokey, the members of Secret Cities have never lived in the same city in their 9 years of making music and touring together.  After they released Strange Hearts, the three members set off in different directions.  Marie became a teacher in the band’s spiritual home of Fargo, ND. Charlie became a civil liberties attorney in D.C. Alex Abnos became a journalist in NYC.
Walk Me Home is a supreme reflection of their live chemistry and diverging lives and musical tastes.  Bringing in band member influences ranging from soul masters like King Floyd & Dr. John to Roy Orbison and using the band’s unique dual vocalists Marie and Charlie to their utmost advantage, Secret Cities created a record with great originality and range.   As it is, it took years of traveling in different directions for Secret Cities to make an album that brought them closer together than ever.

Walk Me Home is released 23rd June 2014 on Western Vinyl.