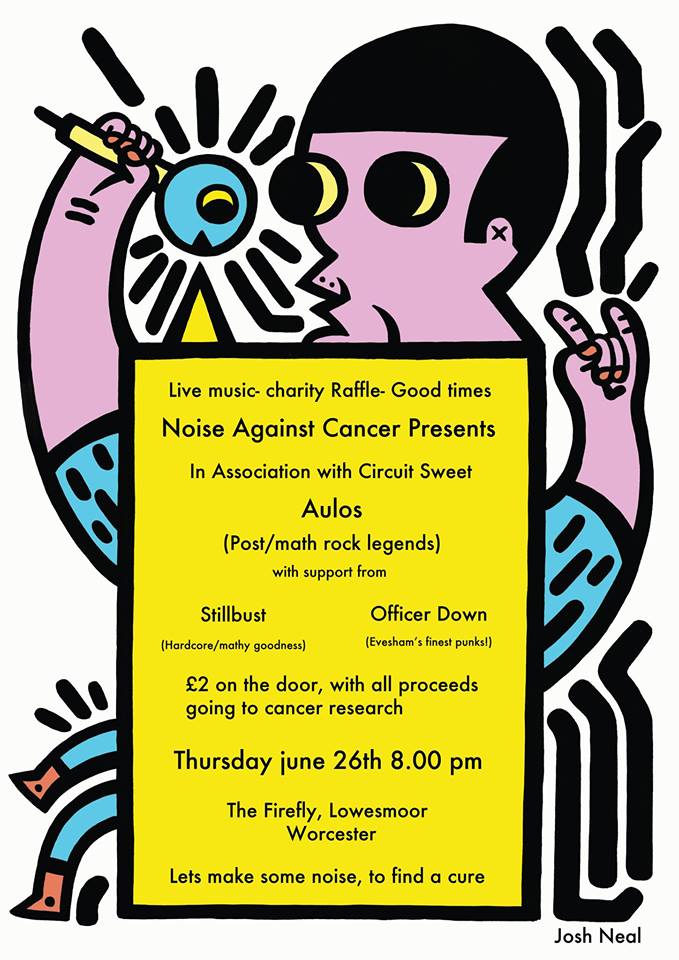 Noise Against Cancer have unveiled a local charity gig which is set to be one of the best live events this year- in association with Circuit Sweet and all for a good cause- Cancer Research. Thursday June 26th, Worcester’s prime venue The Firefly will be home to a night of incredible noise with 3 bands playing throughout the night. The aim of the evening is to raise money for Cancer Research UK by enjoying a live night filled with extra fun.

Aulos- Hereford/Bristol duo back from a short hiatus, Stillbust – recently captivated the crowd at Groezrock Festival and Officer Down who have just returned from their US tour; will be keeping listeners entertained that evening. With a £2 entry charge, all of which being donated to charity, it’s not just music to look forward to – with a special raffle set to take place, this is a gig with a twist.

To coincide with the June 26th date, being only one week away, from now up until next Thursday, Circuit Sweet will be hosting a special Noise Against Cancer Artist Feature. Taking a closer look at all the talent playing and introducing our readers to each act in a more personal manor; as we talk to the musicians to find out more about their musical endeavors, their live sets and what we can look forward to from them that evening.
In our first artist instalment we introduce you to the 2piece that are tied to Circuit Sweet, AULOS. Circuit Sweet originally started as a music journal to Aulos and all the events and releases they’ve encountered, a band that we hope by now are very familiar to our readers. 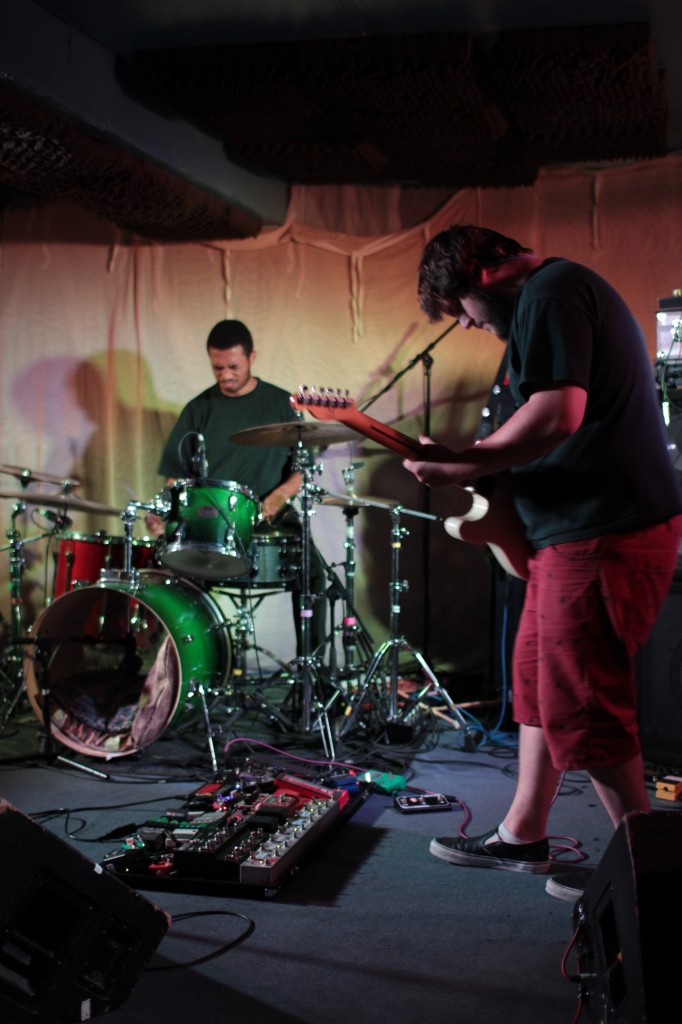 Aulos consist of Oli Montez- guitar and Josh Lamdin- Drums. Both Oli and Josh have been on the road since 2010 and Aulos show no signs of slowing. Their captivating shows are a must see and the duo are soon to  head back into the studio for a follow up release to their debut EP.

Before we get to the details of your forthcoming live appearance at the Noise Against Cancer show June 26th. We want to get to know more on you. Please introduce yourselves and your role within the band- How long have you been playing and performing live?

Josh: My name’s Josh and I play drums in Aulos. I ﬁrst began playing music about 7 years ago on guitar and have since spread myself across a few instruments. This is the ﬁrst band I began performing live with from around mid 2010.

Oli: My name is Oli. But you have to call me dragon. I play guitar in Aulos. With josh I have been performing for almost 4 years.

Josh: I think it was probably a good mix of natural curiosity and my dads small music collection, Frank Zappa, King Crimson to Qotsa and King Tubby. Learning other peoples songs was initially how I taught myself to play as a lot of us naturally do, but it was around the age of 15 or 16 that I found I could push myself more by writing what I wanted to play and hear. Since then it’s all been directed towards carrying that on.

Oli: When I was in primary school I was given the choice of a trumpet, a clarinet or a classical guitar. In hindsight I kind of wish I chose a clarinet. Then everything changed when my dad came home with a borrowed cherry red gigged to death strat and plugged me into his car stereo.

It was a long journey from there to now. I’ve always been in bands as a creative outlet but Aulos is the kind of platform for taking things far out and pushing eachother into new ground.

Oli: The first version of the band broke down durning the first ep sessions and josh was already filling in wherever needed. It was a crazy time and a lot of things changed. From then on we rewrote everything for the two us and just ran with it. Despite countless offers of extra members we have managed to fight off the temptation.

The name came from an upside down box of recorders in our first rehearsal room – a musical instrument repair shop.

Josh: I originally joined the band as a bass dep for some live shows and to record the ﬁrst EP. The band had already been formed prior. Directly after that Oli pretty literally threw a drum kit at me and asked me to learn the set, I was happy to oblige and here we are still!

So we want to know more about what you guys project live, we are so excited to see your live performance at the Noise Against Cancer show at The Firefly, and we want other music lovers to be enticed to come share the day with us all.

How would you personally describe your own sound in one word?
Josh: Meaty.
Oli: Unsettling.

Josh: Louder than you would’ve ever believed possible for just two people, absolute space fuckery. Swirling delays, bit crushing guitar tones and lots of pedal wizardry. If we don’t look like we’re giving at least 115% intent and focus then you’re watching the wrong band. You may hate it or love it but if you haven’t heard us before do come check it out. We work hard at what we do and any support to help us do it longer is greatly appreciated.

Oli: We work hard. It’s an easy thing to say but We work a show from the moment it’s booked. We will enjoy ourselves and do our best to convey our art and entertain. We will show off and have fun. Come get weird with us.

What is it that you personally get from your performance?
Josh: I guess catharsis? To get really enveloped in it and try and reach that zen focus with your band mates. Second to that would be drowned in sweat.

Oli: It’s a release, a weight being lifted. Being able to express our music is a gift and it’s why we do this.

Oli: Fight or flight. Opening the set with a sub bass drone will always interest or offend. We don’t give people a lot of time to rest and take in what we are doing.

Josh: Live Free or Die is always a highlight, it’s really fun to play but the whole set has an edge of controlled improv to it so it can really differ from show to show, whatever’s feeling good in the moment.

Oli: It’s hard to say. When we perform live it is one complete set but I always leave room to break away if I’m feeling it. I do really enjoy testing new material. Especially to old friends.

What can we look forward to from your live performance that night?

Josh: The live performance part I hope!!
Oli: Something new.

Are you planning anything super special for this charity event?

Josh: Every show for us is super special and we will spare no effort on this one. Noise we can deﬁnitely provide.
Oli: Mandatory audience participation dance breakdown.

Josh: Well we have another Worcester appearance booked for Worcester Music Festival late August, that’s always a pleasure. Its getting about time Aulos brought out some new material which is on the agenda.

Oli: Write. Record. Tour. For our own safety we owe a certain nameless group of Welshmen a record in the next 6 months.

And Finally any last words from you?
Josh: Thanks for having me.
Oli: Give me one more platinum plaque and fuck rap you can have it back.

A huge thank to my wonderful Men in Aulos, Always a pleasure and yes this how they speak outside of interviews!

Now you’ve discovered s fantastic band from the incredible line-up get excited to hear more. If you haven’t already saved the date and got some extra money put aside for the chairty raffle on the night, what are you waiting for.