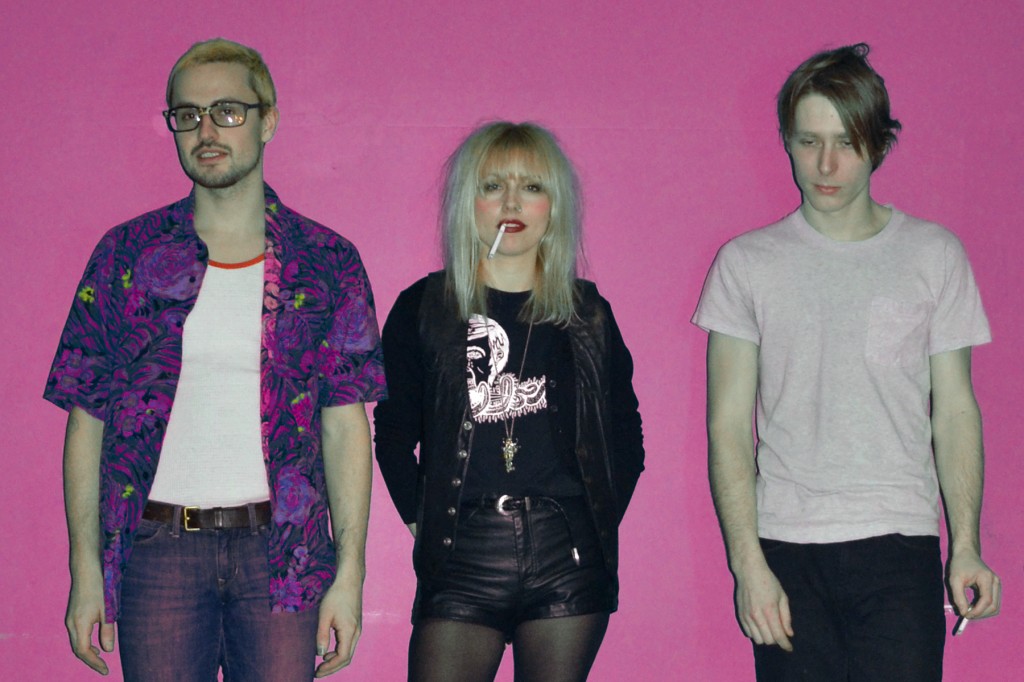 Ready Inside The Velvet Castle for July 15th on Buzz Records

Hailing from Toronto’s fertile punk scene, Mexican Slang are one of the city’s best kept secrets, but not for long. The trio will release their official debut EP Inside The Velvet Castle on July 15th via the ever consistent Buzz Records (Greys, Odonis Odonis, HSY), an amazing blast of psych rock and garage punk, twisted together within infectious melodies that are equal parts rough and deceivingly sweet. Lead by Annabelle Lee(vocals/guitar), the up-and-coming trio has developed an unmistakable presence in Toronto’s underground music community, with Lee being lauded as “quickly becoming one of the best songwriters in the city”. Stereogum premiered the EPs first single, “Blisters,” calling it “hazy garage rock with a crushing power chord refrain that will lay you flat”.

Pre-Order Inside the Velvet Castle – http://buzzrecordsto.bandcamp.com/album/inside-the-velvet-castle-ep

Recorded to 4-track cassette at Mexican Slang’s rehearsal space for a total cost of $178,Inside The Velvet Castle is a reflection of Lee’s time committed to a psychiatric facility. Lee elaborated on the concept, “Each song is written from the perspective of a different patient, struggling with a distinct dilemma. The songs are a combination of frantic, schizophrenic, manic episodes between periods of lucidity and sedation. The theme of this album is the collective purging of shame, anger and isolation by these individuals and therefore by me, as each subject’s story actually represents a personal thought or experience.”

Offering nothing short of musical catharsis, Mexican Slang attempts to strike a balance between clarity and chaos, expertly alternating between saccharine and vicious, coaxing the listener into a potent expulsion of their own negativity.

After countless years of struggling to form a band, Annabelle Lee took on Mexican Slang as a solo recording project from her attic, releasing her first EP online in the summer of 2012. “I always feel as though time is running out, there are a lot of things that I need to express creatively and having been able to work alone through this medium allows me a great deal of freedom in my emotional output.” After a chance meeting on the sidewalk outside of a show, Lee was able to inject live performance into her musical brainchild by enlisting Jimmy Tony Rowlinson on bass and Denholm Whale (Odonis Odonis) on drums. Since then, Mexican Slang has played a flood of shows at numerous venues across the city, most notably as an official act at this year’s NXNE Festival and alongside acclaimed rising international bands such as Destruction Unit, Viet Cong and Perfect Pussy.

While maintaining a DIY approach to making music, Lee continued to write and record at home, self-releasing 4 digital EP’s and a split cassette with HSY on Hamilton, ON label Perdu. Described as “loud Suicide-style lo-fi bedroom recorded jaunts that hypnotize the brain and ears”, Mexican Slang elicits comparison to the likes of Helium and “Babes in Toyland meets Ty Segall”. Lee’s primary focus has been coalescing the power of extremes, by juxtaposing heavy guitars with compelling melodies and contrasting noisy garage rock with moments of reverberant serenity. Though drawing personal influence from artists such as Fugazi, The Cramps and Nation of Ulysses, Lee is poised to create a distinctive sound all her own.

With the support of Buzz Records, Mexican Slang plans to record a full-length album and tour Canada and the US in the upcoming year. Their haunting noise pop aesthetic and captivating live shows have set them apart, creating a far-reaching, eager and devoted fan base. As for Lee’s poignant lyrical depth, face-melting guitar and impassioned productivity, there seems to be no end in sight. “The prolific amount of songs she’s written would be a lot less remarkable if they all weren’t so damn good.”