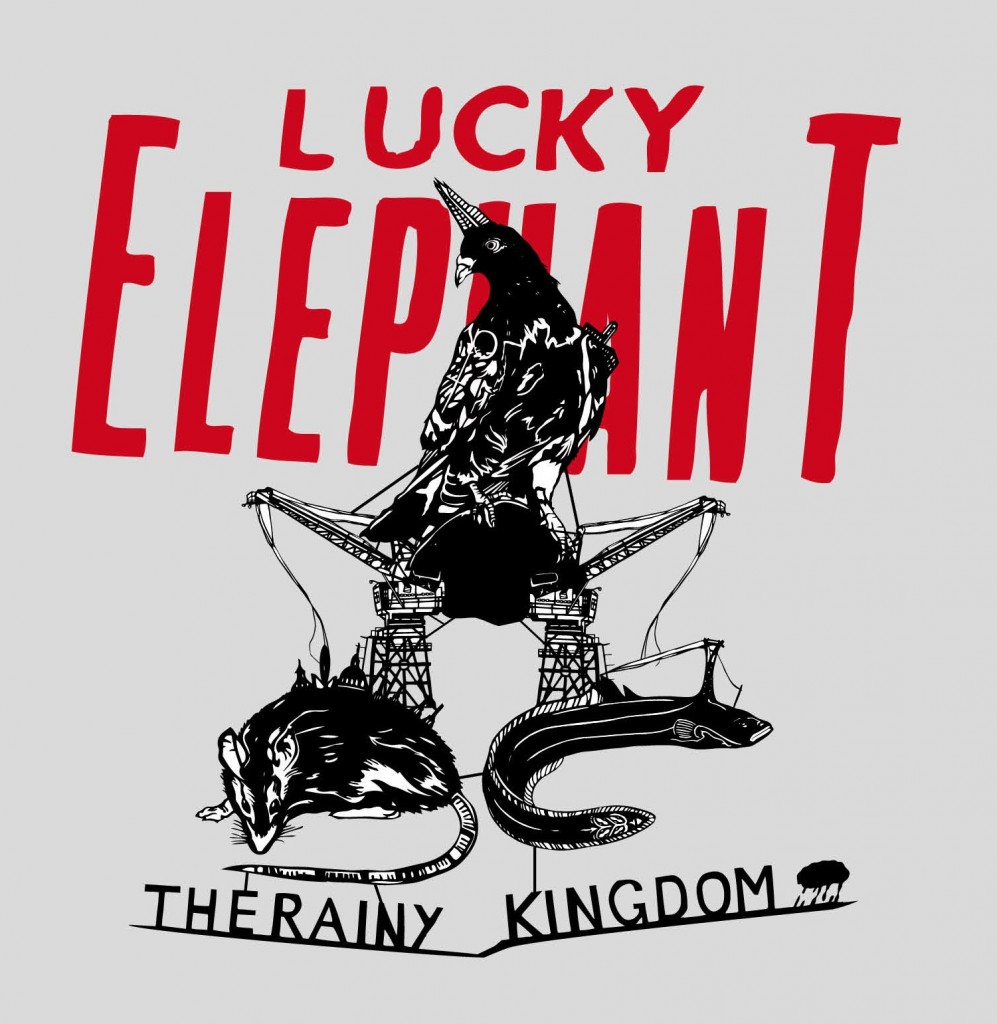 London collective Lucky Elephant are to release their new album Rainy Kingdom through Sunday Best on August 25. Produced by Paul Butler (Michael Kiwanuka, Devendra Banhart, The Bees), the album will be preceded by the release of the track ‘British Working Man’ as a single that will be available as instant gratification upon album pre-order here: http://smarturl.it/TheRainyKingdom.

The album’s opening single “British Working Man” was nearly the title track, “…but we didn’t want to spend a year explaining to people that it’s not a BNP record.” The song is accompanied by a stop-motion animation video set in a recognisably modern London (the DLR and the London Eye are both visible, as is an Apple laptop), depicting the life and repetitive routine of an office drone. The visual style will evoke nostalgic associations with – depending upon your generation – Trumpton/Chigley/Camberwick Green, Postman Pat or Bob The Builder, all set in an ordered society where everything turns out alright. In Lucky Elephant’s world, however, there’s always the unsettling suggestion that things won’t turn out so well: the sight of a passenger plane passing overhead is accompanied by the sound of a WW2 bomber.

As the band’s own stated influences (Penguin Cafe Orchestra, Tom Waits, Yabby You, Ian Carr’s Nucleus. Eric Satie and Les Dawson, since you ask), Rainy Kingdomacts as a companion piece to the obscure but fascinating TV documentary which inspired it; We Was All One, made by Ken Ashton for Thames Television in 1972. It depicted the dying working class culture of the Bermondsey, Old Kent Rd and Elephant & Castle areas with beautifully bittersweet pathos, catching the moment when the traditional Cockney way of life was being dismantled, as slums were cleared, communities broken up and inhabitants sent to healthier, but more isolated tower block homes.

Lucky Elephant’s Deptford-born and bred keyboardist Sam Johnson knows the neighbourhood in the film intimately. His band-mates, however, bring more of a distance: fellow gadget-twiddler Paul Burnley is from Bradford, and the line-up is completed by North Londoner Laurence Clack on drums, and vocalist Emmanuel ‘Manu’ Labescat, from the south-west of France. Together, on this album, they pursue the relatively-uncharted “band as social historian” role also explored, in recent years, by Public Service Broadcasting, British Sea Power and Eccentronic Research Council.

Johnson discovered Ken Ashton’s We Was All One documentary more-or-less by accident. “It was probably a bored internet moment, clicking around, you go down these weird alleys. And immediately, I said ‘This is amazing’. We all became slightly obsessed with it. When you’re writing you need a spark, and usually it’s heartbreak or lost love, but we used this. It was a microcosm of so much that is going on. Not just in South East London or London or England even, but the whole of Europe.”