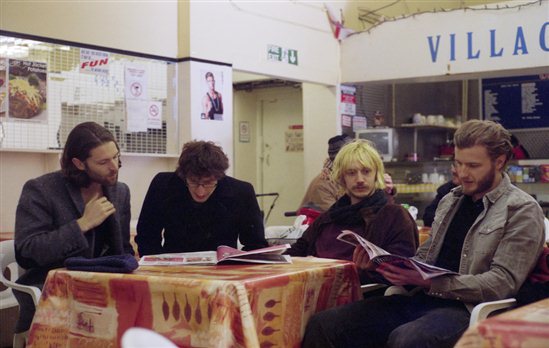 KING OF THE MOUNTAINS FESTIVAL : DRY THE RIVER REVEALED AS THE FRIDAY NIGHT HEADLINERS PLUS FULL MUSIC LISTINGS

King of the Mountains Festival has revealed the full music programme for the festival taking place on July 4 – July 6.
Dry the River have returned in 2014 after taking a year out to record the follow up to 2012’s critically acclaimed album Shallow Bed (along with 3 years of constant touring). 2014 will see them headline the Friday night of King of the Mountains Festival and prepare to unleash the eagerly awaited new album. “They offer a glimpse of the pastoral with their infectious semi- acoustic ditties. ” The Guardian
Joining Dry the River are Post War Glamour Girls. It’s been another great year for the Leeds band, releasing debut album Pink Fur and selling out shows all over the UK. Added to the bill are Alaska, who have been causing a bit of a stir with their underground parties in Leeds and Manchester and gaining a fair bit of national radio play. Completing the line-up are Cottonwoolf who are about to release their debut EP and seem to be making noise at lots of festivals this year.

The above join the already confirmed headliner for Saturday Huw Stephens (DJ) and Sundays headlinerPaul Thomas Saunders. Plus Sky Larkin, To Kill A King, Kyla La Grange, The Witch Hunt and many more who play over the weekend.

With music, comedy, Yorkshire food and ale, kids and family activities plus Tour De Cinema, camping cycle and car parks as well as huge screens to watch all the action, King Of the Mountains is one of the best places to enjoy the Tour De France weekend.

Camping, Parking, Group and Family tickets are also available. All tickets can be purchased online at: