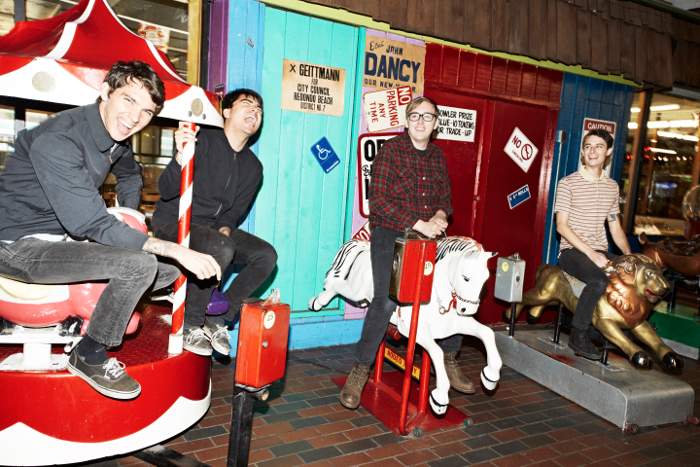 Hailing from the South Bay in Los Angeles (US), pop-punk outfit Joyce Manor will release their new album Never Hungover Again on July 21 via Epitaph Records. Visit YouTube to watch the video for ‘Catalina Fight Song’ in which the band takes a lesson in jiu-jitsu. Never Hungover Again is available for pre-order at kingsroadmerch.com.

Joyce Manor was conceived in the back of a car over a cheap bottle of booze in the Disneyland parking lot – the kind of beginning that California dreams are really made of. Co-founders Barry Johnson (guitar, vocals) and Chase Knobbe (guitar) started a power violence band named after an apartment complex that Johnson would walk by every day. Caught off guard, Joyce Manor was invited to play a show so they scrambled to scheme a plan. Joyce Manor made their debut as an acoustic duo but soon discovered that “playing loud is just more fun,” according to Johnson. They rallied Kurt Walcher to play drums and welcomed old buddy Matt Ebert on bass. The new Joyce Manor attacked their songs with enthusiasm, neurotic precision, and discovered beauty in simplicity along the way.

In 2011, Joyce Manor’s self-titled debut was impactful with its standout anthem ‘Constant Headache’. Lauded favorite, Of All Things I Will Soon Grow Tired, was released in 2012 on Asian Man/Big Scary Monsters. Joyce Manor has earned cult status within the punk community, and Never Hungover Again is the album that will satisfy those who have waited. It’s the speed and sense of melody of the Descendents, the bittersweet lyricism of Jawbreaker, and the heart-on-sleeve honesty of Blue Album Weezer. It’s the rare sort of album that redefines a young band.

Never Hungover Again was recorded at the end of 2013 with producer Joe Reinhardt at the Lair in Hollywood and was mixed by Tony Hoffer (Belle and Sebastian, M83, Phoenix). Never Hungover Again captures a complex feeling in ten precise songs that is part sadness, part loneliness, part anger – even when things seem to be going okay. With some of the saddest lyrics you’d ever shout along to from the front row, Never Hungover Again is heartbroken pop-punk perfection.

Joyce Manor will tour the UK later this year in support of the release.