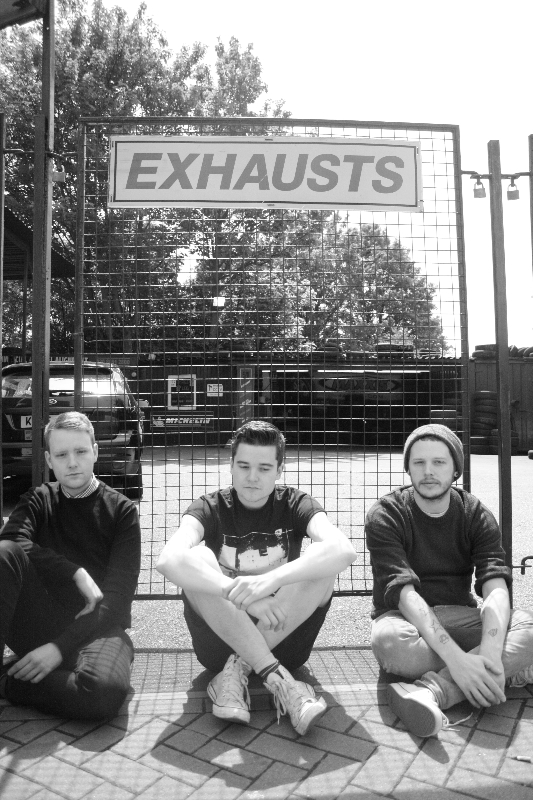 INTRODUCING: The Exhausts
Single ‘Andalucia’ set for release next week on Everything Sucks Music
Listen and watch the new music video here

Bursting out of the Big Smoke, London punk trio THE EXHAUSTS are firing on all cylinders with a brand new single ‘Andalucia’ which is backed by B-side ‘Sometimes’ and set for release through Everything Sucks Music on 16th June. It was recorded in exemplary The Exhausts style, mostly live above an abandoned pub in Kentish Town. The band have just unleashed a music video to accompany the lead track which you can watch here.

They released their ‘Eric Cantona’ EP last year and are currently putting the finishing touches on a debut album to be released later this year and the ‘Andalucia’ single is just a taster of the mayhem that’s sure to ensue. The Exhausts are already making one hell of a noise.

Bassist/vocalist Rory (ex-CITY DWELLER) and guitarist/vocalist Tommy (also of RIVALRIES) have known each other for over five years, spending “countless hours during that time listening to early Green Day 7 inches and talking about starting a band that did a similar sort of thing. Then one evening in late 2012, a couple of weeks after City Dweller (Rory and Jake’s old band) split up, we decided to actually do it! I sent a Facebook message to drummer Jake (also of DOE) the next day and he was happy to jump on board.”

Drawing on pop punk such as Green Day (“an obvious influence, although we often get told that we sound less like them than we think, which I guess is a good thing,” explains Tommy) and the Buzzcocks, they also count garage punk (The Briefs, The Hives) as a major influence. Lyrically, they’re inspired by the storytelling of American greats the Replacements and Bruce Springsteen yet the band bring their own British idiosyncrasies to their storytelling a la Blur, The Kinks etc.