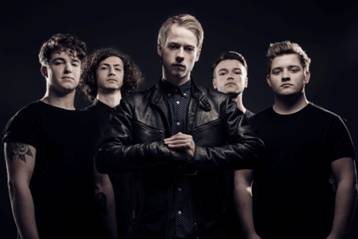 After a hugely successful set at Download Festival 2014, Cytota today announce a run of headline shows for September 2014, having played the Red Bull stage on the Saturday of the festival and playing to a packed tent, the band look forward to seeing their fans out on the road again. With HUGE singles such as 2013’s ‘Generation Scared’ and this spring’s ‘Sinnocence’ the band have the set list to slay venues across the UK and now, having supported acts includingMemphis May Fire and Bullet for My Valentine earlier this year, Cytota look set to tear up the stage at their own headline shows.

The Birmingham 5 piece have seen great support for their music from the UKs media – with plays on BBC Radio 1from Daniel P Carter, Kerrang! Radio’s Alex Baker has been a huge standard bearer for the band on his ‘Unsigned show’ as well as having their video’s played on Scuzz TV and coverage in Kerrang magazine and Rock Soundmagazine.

Joining Raw Power Management last year, the band are in good company – home to Bring Me The Horizon, Don Broco and Mallory Knox as well as many more, the band will look to consolidate their early praise and achievements and emulate the success of those bands they are working alongside. Make sure to catch Cytota on the road this September.