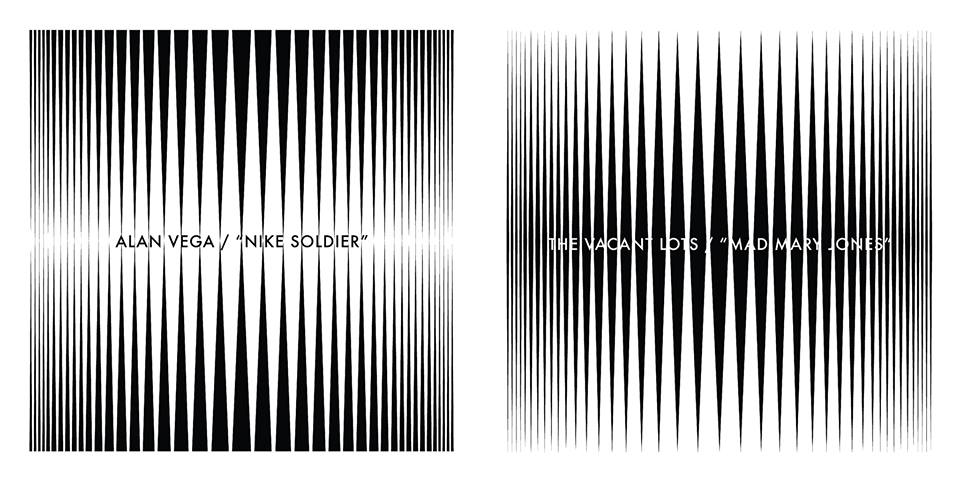 Fuzz Club Records are thrilled to announce the Split Single Series, a regular release of 10” vinyl limited edition, featuring exclusive tracks from some of the greatest Rock & Roll artists of all time and some of the most exciting contemporary acts. The next issues include Suicide’s Alan Vega, Thurston Moore and Lee Ranaldo of Sonic Youth, Anton Newcombe of Brian Jonestown Massacre, A Place To Bury Strangers, The Telescopes, White Hills and Dead Skeletons. Expect some regular head-banging heads-up on this!

Alan Vega has joined the The Vacant Lots, for a glorious 4th issue of the Fuzz Club Split Single Series.

Vega is the man who transfigured the American dream of freedom into a mechanical nightmare. In the early 70s he formed the band Suicide with Martin Rev and together they tore apart the Rock & Roll band stereotype. Their legacy stretches out from underground music to mainstream, with Bruce Springsteen quoting them as a major influence and MIA sampling “Ghost Rider” for one of her hits. After a long silence, Vega is releasing the track “Nike Soldier”, included in the Fuzz Club Split Single N.4.

The Vacant Lots, from Burlington, Vermont, formed in 2010. Pitchfork described their first single, “Confusion“, as “pared down sound, with all excesses fat deliciously shorn to the bone, allowing stone cold downer vibe to bludgeon the listener into a glorious, senseless stupor”. Their minimalist and primitive Rock & Roll blends the psychedelic rock template with a genuine Punk spirit and is combined with the use of synths and drum-machines. They will support Brian Jonestown Massacre’s UK tour and their debut LP will be out soon on Sonic Cathedral. The track included in the Split Single is “Mad Mary Jones”.

The split single is distributed by Cargo and is limited to 400 white vinyl copies, except for a limited 100 on clear vinyl, which are exclusive to the Fuzz Club Store

The Vacant Lots on Alan Vega: “Truly one of the most amazing experiences ever. He is 100% artist”.