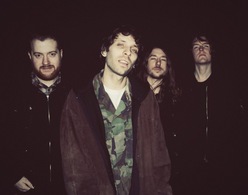 UK TOUR IN MAY

“If you’re searching for the next big thing then look no further. It is difficult to see how, in a few years time. Whales in Cubicles won’t be headlining Reading Festival.” Artrocker

“A combination of knowing when to blow up speakers and when to take a break blasts WIC into the stratosphere. Drunken Werewolf’s favourite active British band.” Drunken Werewolf

Since forming in 2012, Whales in Cubicles have carved out a distinctive niche within the UK music scene, creating complex but often minimalist soundscapes that owe more to 90s alternative rock than psychedelia. With strong support from The Fly, Q Magazine, The Independent, Artrocker, Drunken Werewolf, Clash and major attention from BBC Radio 1, BBC 6Music, XFM and Amazing Radio.

Whales in Cubicles are bringing their music back on the road with a UK tour in May, ending on June 5th with a show at the Barfly in London.