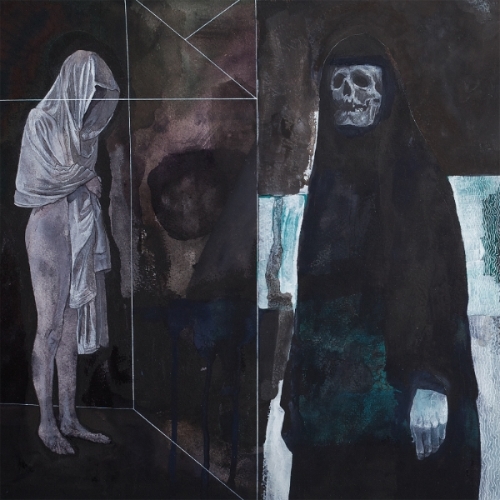 Pariso and Svalbard first met and played together on Sunday 17 March 2013 supporting Direwolves in ‘the capital of champions’, AKA Cardiff. To say their squalid love affair blossomed furiously quickly would be somewhat of an understatement. UK and European shows have since been embarked upon, vans split, many OTT meals shared. And now, this…
Conceived as a plausible, albeit logistically complex, idea outside Gelupo ice cream parlour, Soho, London on a muggy summers day – Pariso and Svalbard have not only spurred each other on to deliver their best material to date, but also teamed up for 2 truly collaborative tracks. These songs were not conceived under some ill-thought out ‘jam’ session, but fully realised, written and refined, almost as new bands unto themselves – each featuring a different instrumental personnel, each with all 3 vocalists.

When left to their own devices, Svalbard turn in their most vibrant recordings to date, the newfound clarity giving added emphasis to the emotional weight that their unique post-genredefinition-core possesses. On the flipside Pariso delve into a lower tuning, flirting mercilessly with elements of stoner-rock, black metal and dissonant hardcore, yet still forever definably themselves.

Wrapped in thought-provoking, potentially disturbing, artwork courtesy of Daniel P. Carter that reflects the darker tone of the music contained within – this is an album that emphatically displays the coming together of kindred spirits, whilst also giving a triumphantly kaleidoscopic view of where these bands could be heading next…

The record will be released this summer on Tangled Talk in the UK, Holy Ground in the USA, Swarm of Nails in France and Through Love in Germany.