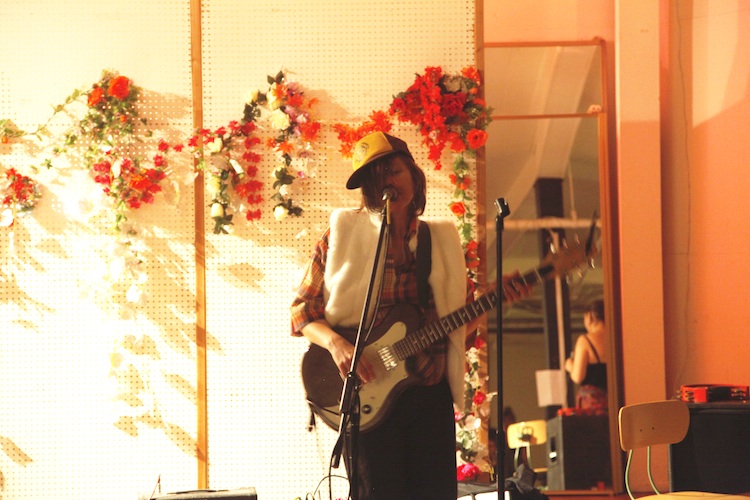 songwriters or new age synthesiser baths. She is still interested in songs, and she has always been a wordsmith, but her songs don’t need to have words to signify. When words are utilised, she doesn’t waste them. They are beautifully mystical outbursts of visionary poesis, but their narrative power is located within and informed by, the space, the harmonic colour, the context in which they are sung.
Choral voicings spread out across the stereo field like muted cloud formations split by sudden outbursts of vibrant colour, verdant mosses on ancient stones, opal sized windows of clear blue set against a vast horizon. Pump organ drones swell and respirate, patient and slow, with softly resonant gongs from the roof of the world. This is music about healing, about listening, about surviving and transmuting the strange inheritance of language. Moving towards a direct perception of apparent reality through collaboration, breath, sound and song.
TJO has always been a shapeshifter. Listen to this new album, Where Shine New Lights with open ears, forgetting any previous incarnation, or perception of what you believe this mercurial artist to be or to have been. Using some very basic recording equipment and her vivid musical imagination, she has achieved a rare essentialism wherein all unnecessary elements have been stripped away leaving only the most indispensable sounds. Concise, but expansive, stripped of unnecessary gestures; guitars resonate, amps hum, and an exquisite, languid melancholia appears out of the haze.
“Silvery chants multi-tracked against distant bells, lilting organ and sun-warped tremelo guitar, before giving way to gentle surf-folk spirituals that, at first, seem suffused in the same late-summer glow as The Beach Boys’ low-key ’68 LP Friends. But this brightness soon fades, the album becoming a beautifully solitary journey into night.” – 4 STARS, MOJO
“Stripping back serves her well, the best songs are also the starkest. The Yoko-Ono-esquely titled “Over. Round, In a Room. Found.” is as bare boned as it gets: a low, thudding drum overlaid with wordless, choral voices and a distant quivering texture. Surprisingly it works, and it works well.” – WIRE
“Alongside serene slowcore drifts like “Glow Now”, we find O’Neil experimenting with pump organ drones (“Bellow Below As Above”) and hushed exotica (“The Morning Glory”). Little is overstated, but Low fans will find much to love in “New Lights For A Sky”, a cold chorus that makes powerful use of quiet resonance and empty space.” – UNCUT
“The hum of Tara Jane O’Neil’s six-string is one of life’s perennial comforts, and the words that pour from her honeyed throat feel as steady as the passing of time.” – NME
“Don’t mistake delicacy for a lack of impact: this album – in places a dreamy folk, other a reverb-heavy, Lynchian mood piece, others a gently insistent drone – gets under your skin and stays there. This is as original and unusual as it is compelling and involving.” – NARC
“While the individual tracks on Where Shine New Lights stand up in their own right, O’Neil has clearly taken great care in weaving them together, with each providing a context or starting point for the next, shifting and morphing along the way. Each tone, note, or scrape here seems deliberate and purposeful without ever feeling overly controlled. In less capable hands the melancholy feel of the tracks could easily become overwhelming or cold, but O’Neil and her collaborators (including Ida Pearle on violin and long-term collaborators Daniel Littleton and Elizabeth Mitchell of Ida amongst others) imbue a sense of warmth to the proceedings with the subtlety of their playing and the sweetness of their harmonies.” – THE LINE OF BEST FIT
“It is, basically, lovely.” – FACT
“There’s a characteristic tone that runs through all of her albums– an elastic guitar reverb that stretches to give a delicate puff to her songs, drums that rarely go beyond a gentle grounding pitter-patter and, of course, the haunting lull of her voice, which beckons the listener into her world with mellow grace.” – PITCHFORK
“Tara Jane O’Neil is a one-woman creative tornado.” – EMUSIC
“O’Neil is playing to the mists of rain floating from the earth as we might hope our souls would one day. ” – TINY MIX TAPES
“This is perhaps the most delicate music I’ve ever heard. Soft, lilting guitars drift by on a light breeze whilst a somnambulist Julee Cruise whispers about something, somewhere, somewhen probably maybe. This is the diametric opposite of Jandek and very beautiful it is too.” – COLLECTIVE ZINE