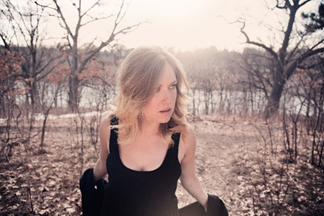 Megan Bonnell is to release her debut album Hunt And Chase in the UK & Europe on June 2, 2014, via Nevado Records. Hunt And Chase showcases sonic textures and lyrical themes that greatly belie her young age and shows off Megan’s smoky voice and sophisticated writing in abundance.

Now based in Toronto, Megan Bonnell’s roots trace to rural Ontario, where she grew up surrounded by forests and fields. She began teaching herself piano at only four years old, and has been making music ever since. She continued her studies in an arts-focused secondary school, this time in voice, and at the same time began creating her own compositions. Megan’s debut LP follows the previously released ‘Maps’ EP – an aptly named effort that captured the poise and potential of a young artist navigating her way towards a signature sonic niche. Her journey there seems to have been a short one, though, as ‘Hunt And Chase’ is a lush, beautiful affair.

“It’s always been just piano and voice for me,” Megan says of her songwriting. “I hear all of these other things, other elements, in what I write.” On ‘Hunt And Chase’, those elements were enhanced by producers Chris Stringer and Joshua Van Tassel; “They brought it to life the way I’d envisioned it,” she says. While some songs are very pure in their delivery – beautifully sung and wonderfully succinct in structure – some, like lead single ‘Coming Home’ and ‘Off The World’, wander from lucidity in their atmospheric arrangements while anchoring the listener’s focus thanks to Bonnell’s delicate, almost divine vocals. Others, like the album’s title track, invite you “down the rabbit hole,” leaving one world and streaming to another.

“It’s almost like a dream sequence to me, I weave in and out of the place I am and the place I imagine myself to be.” Often, that place is a snapshot from her somewhat isolated upbringing. “There are so many emotions and things you find in that kind of environment,” she says of the rustic, pastoral setting of her youth. “There’s an overwhelming sense of love that you get from nature and the wild, but there’s also an inextricable loneliness there as well.”

Loneliness and love: the enigmatic pairing of emotions that explain her seduction by the surreal, are constant themes throughout the record and are implicit in Bonnell’s charm, delivery and all round artistic flair.