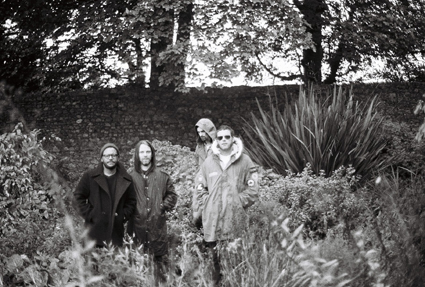 February 2014 saw Sweden’s Les Big Byrd release their “Back To Bagarmossen” EP on London/Stockholm indie label PNKSLM Recordings.  The 10” vinyl received rave reviews, even picking up mainstream TV coverage on Sweden’s TV4.  Following the EP, Les Big Byrd are now preparing to unleash their debut full length, They Worshipped Cats, on Anton Newcombe’s A Records.  Anton has co-written and plays two tracks on the album.  They will be supporting the Brian Jonestown Massacre on their European tour.  They will also be playing at Liverpool Psych Fest in September and supporting fellow Swedes, Goat, at their London Roundhouse show.

Les Big Byrd was formed in Stockholm by Joakim Åhlund and Frans Johansson in 2012.  They had both been in different rock outfits;  Frans’ band Fireside, got signed by Rick Rubin to his label Def American and Joakim had a taste of international success with 60’s-influenced garage-pop outfit Caesars, as well as his other, more electronically flavored project, Teddybears.  Years later, Frans and Jocke met up again after both Caesars and Fireside had crashed and burned due to drug-fueled intrigues, road-weariness and bad management.  They decided that they still – in spite of everything – had their love for music intact, and the dream in common to get the perfect band together and give it one more shot. They recruited Jocke’s former bandmate, drummer Nino Keller and keyboardist Konie and started jamming and rehearsing.

They Worshipped Cats will be released in the UK on 2nd June 2014.