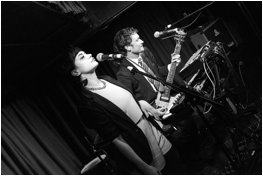 London-based Vienna Ditto are a true example of what the current music scene urgently needs. It needs for somebody to grab it by the horns and shake it up somewhat. A far cry away from the pretentious shoegaze, indy-pop smush that is populating the world of music press in the UK, the band are back with a BANG and a new single which continues in the trend of doing something out-of-the-ordinary.

Hatty and Nigel originally met when he began teaching her guitar around when they were younger. Years later fate made them bump into each other again and the relationship blossomed into a musical frenzy destined for success. Shortly after they began writing, their song Long Way Down was instantly picked up by Huw Stephens and played on his BBC Radio 1 show. Since then it has been a snowball effect of musical triumphs for Vienna Ditto having played the likes of BBC Introducing Stage at Glastonbury and a Maida Vale session for BBC 6 Music’s very own Tom Robinson.

Slightly reminiscent of Portishead and Jack Nitzsche, the new single Feeling Good is an intriguing mix of starkly contrasting styles, which aims straight for the jugular with its haunting chorus and upbeat rockabilly riffs. This blend of psychedelic rock and electronica paired with Hatty’s smoky vocals has created a disorientating, enthralling and captivating sound which is truly unique to Vienna Ditto. Production-wise there is a subtlety of Lamb with the creative characteristics of recent big hitters The Knife and the guts of PJ Harvey’s Let England Shake.

Filled with enticing hooks and unexpected plot twists, Feeling Good is an excellently crafted song demonstrating the band’s ability to push musical boundaries, and will be available for sale and download everywhere from Monday 9th June.