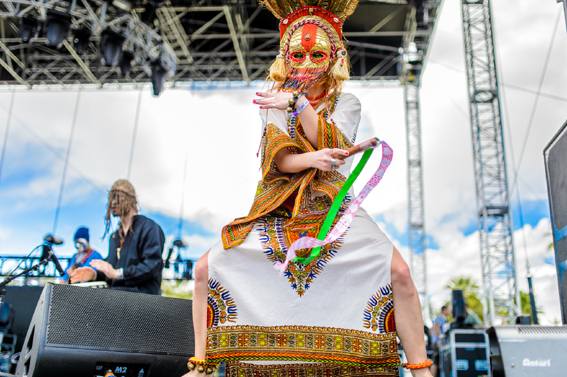 “Live Ballroom Ritual is relentlessly brilliant.  If you only see one Swedish masked band of prog-psych-Afrobeat-voodoo-rockers this , or any other year, make it Goat.”  Q

“Goat stake their claim as one of the most invigorating bands in the world right now.”  Mojo

“…stunning array of sounds, they synthesize into their globetrotting psych-funk.” Wire

“Proving once more that the devil gets all the best music, Goat came to Koko last night to create one hell of a racket.”  Evening Standard

Masked, tribal, psych rockers Goat have announced their first ever European tour that will take them through 12 cities and finish with a huge show at the famous Roundhouse in London.

The Swedish band’s highly acclaimed debut album World Music in 2012 on Rocket Recordings, become one of the most talked about albums of the year.  Described as “a brilliant and intoxicating record” by Clash Music and  the BBC urged listeners to “surrender your mind, body and soul to the music of Goat and one of the year’s best albums”.  Since then, Goat have wowed fans at many of the great festivals including Glastonbury, Primavera, Roskilde, Flow, Way Out West, ATP and most recently, Coachella.

Their stunning live set was captured at a Glastonbury warm-up show at the Electric Ballroom in London, and was subsequently released as an album called Live Ballroom Ritual which left many journalists citing it as one of the best live albums ever made!

Fellow Rocket Recordings artist, Lay Llamas, whose debut album Ostro is released on 26th May will be supporting Goat on all UK dates.

In other news – Goat will also be appearing at Latitude festival and Eurokeennes in France prior to this forthcoming European tour, where audiences can expect to hear new tracks from their follow-up to World Music.

Goat are currently in the studio putting the final touches to their much-anticipated new album before heading out to bring their unique brand of Tribal Psych to crowds across Europe.