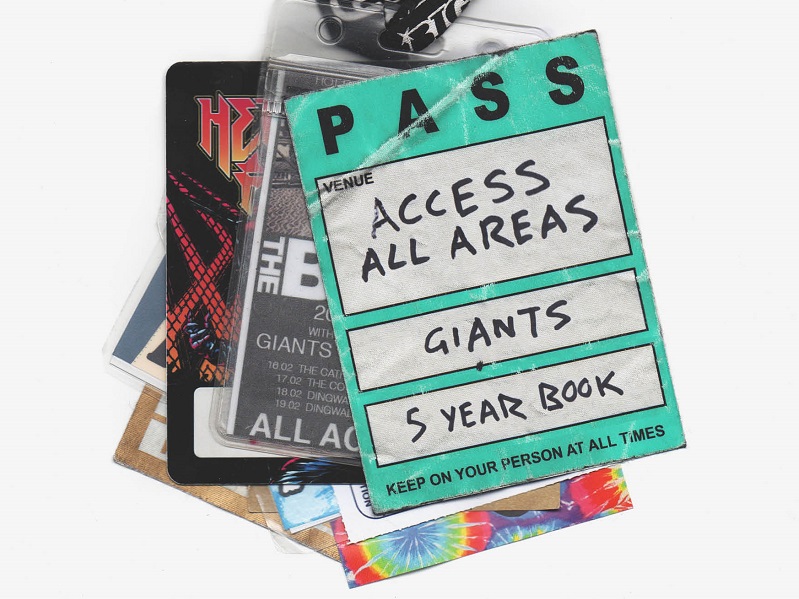 As Essex’s hardest working DIY skate punks, GIANTS celebrate their 5th anniversary as a band this year on the 17th of July at The Black Heart in London at a special birthday gig. Support comes from friends in Grappler, Drones and Pints and the band will also be selling a very special limited edition book charting their story so far.

Watch a trailer celebrating 5 years of skateboards and powerchords with Giants here: http://youtu.be/xtkkLvq9V9U

‘Access All Areas’ is a 40 page full colour A5 booklet containing a full recollection of the best, worst, funny, crazy and most memorable times of the band’s career so far.  Limited to 100 copies, the book features an in depth collection of their favourite photographs from on and off the road over the years as well as a full gig listing and much, much more.

The book can be bought as a stand-alone item or a part of a bundle deal which includes the band’s whole discography in digital format along with a ticket to the 5 year show – preorder now via their bandcamp page.

Commenting on the book, the band said: “Whether you are a relatively new fan of the band or someone who’s been there with us since the start, this book will have something for you to enjoy and laugh at and will hopefully give you an insight into life as a DIY touring/recording band in a slightly different and unique way.”

Giants are currently in the studio writing and recording their debut album – all proceeds from the sales of the book will go towards funding the release.

Watch the video for Won’t Be Told here: http://youtu.be/roMkpOBOEHw