Hot on the heels of the release of their latest album, One Hundred Percent Suave, Fat Goth are happy to announce they’ll be playing the T Break stage at this year’s T in the Park!

The band released this picture and statement below on hearing the news that they’d be taking the stage: 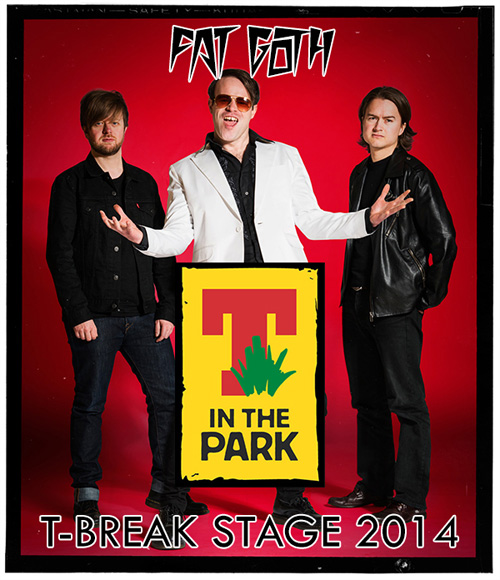 “After the release of our previous album ‘STUD’, the rest of 2013 was incredible and we have so many highlights it’s difficult to pick one above the rest. However, getting to finally play T In The Park on the BBC Introducing Stage felt like a big lifetime achievement for all of us.”

“To follow the release of what we all feel is our strongest album to date with yet another appearance at T In The Park is truly phenomenal. T-Break affords a spectacular opportunity to play at one of the biggest festivals in the UK and we definitely feel very lucky to be involved! It’s also great that we are one of a number of bands from Dundee playing it this year. Dundee invasion!!”

2014 is shaping to be an amazing year for the Dundee trio, as Kerrang! have already exclusively streamed the album in its entirety for their readers, and reviews from the likes of The Line Of Best Fit, Rock Sound, The Skinny and Big Cheese Magazine have been pouring in like a torrent of warm beer.

‘Class A’ premiered on Rock Sound and is now available to download from the band’s SoundCloud page. The video for the track was premiered exclusively by Kerrang!, and is available to watch on the band’s YouTube channel.

One Hundred Percent Suave is released via Hefty Dafty with support from Creative Scotland.

Buy it on iTunes or Bandcamp… if you dare.