BL’AST! UK/EUROPEAN TOUR DATES CONFIRMED PLUS NEW LIVE LINE UP ANNOUNCED
Iconic Santa Cruz heavy fusion act, BL’AST! have confirmed UK/European tour dates this June, and a new live line up. Original BL’AST! alumni, vocalist Clifford Dinsmore (also of Dusted Angel, Gargantula) and guitarist Mike Neider (LAB) will be joined by Nick Oliveri (Kyuss, Queens of the Stone Age, Mondo Generator) on bass and Joey Castillo (Queens Of The Stone Age, Danzig, Eagles Of Death Metal & Wasted Youth) on drums.
On the subject of touring in the UK and Europe, Mike Neider comments…”we couldn’t have asked for a more perfect fit. Joey and Nick have shown tons of respect to the music and have added their blood to make even more manic and heavy! BL’AST! is in full sound assault mode!
We are looking forward to the upcoming dates, honestly, it feels never better! And to come over for the first time at this point in time will be a great display of heavy!“
Vocalist Cliff Dinsmore adds...”We have such an amazing band chemistry going on right now…it’s beyond anything I’ve experienced in all my years of playing with BL’AST!  Nick and Joey’s contribution to the band has brought it to a level of tightness and intensity that is totally insane!!”
Nick and Joey haven’t played together since Queens Of The Stone Age over 10 years ago – Joey C has this to say about being part of BL’AST!…”Very stoked to be playing with BL’AST! For a couple reasons: I go way back with the guys, be it when I was a kid playing in “Wasted Youth”, we did shows together, and I was always a fan. And obviously playing again with Nick Oliveri, my other old friend from our days in QOTSA together, makes it even that much greater and fun! Can’t wait to get overseas to show what BL’AST! is all about, see ya soon!“
Finally Nick Oliveri sums things up perfectly…”BL’AST! Is like getting your ass kicked and liking it. I saw them play when I was younger with Exploited. Bands like these change lives. It is an honor to play with Mike, Clifford, and I’m really stoked to be playing with Joey C again. We are gonna kill it.“
The full tour dates are as follows… 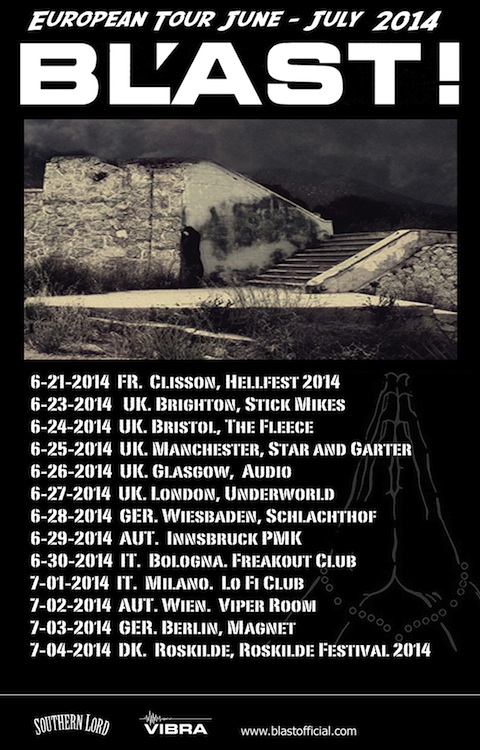 They shall also play the following dates in the US:
Friday 23 May Portland, Star Theatre
Saturday 24 May Seattle, Neumo’s
Sunday 25 May Seattle, Highline
July 24-27 Philadelphia, This Is Hardcore Festival at Electric Factory
Don’t forget, you can still get your hands on the digital promo for their latest release, The Expression Of Power, an alternate version (the Track sessions) of their debut album which is now officially available via Southern Lord on CD and triple LP. Also included is a 28 page booklet with amazing BL’AST! photos from the mid-80s. All tracks (re)mastered by Brad Boatright.

Their boundary pushing form of heavy rock/punk and hardcore, advanced musicianship, unstoppable energy and intense perseverance is as prominent now as it ever was.

CD TRACKLISTING:
01. TIME TO THINK
02. SURF AND DESTROY
03. FUCKIN’ WITH MY HEAD
04. E.I.B.
05. OUR EXPLANATION
06. THE FUTURE
07. SOMETHING BEYOND
08. BREAK IT DOWN
09. TIME WAITS (FOR NO ONE)
10. I DON’T NEED II
11. IT’S ALIVE
12. LOOK INTO MYSELF
13. NIGHTMARE
-TRACK SESSIONS-
14. TIME TO THINK
15.SURF & DESTROY
16. FUCKIN’ WITH MY HEAD
17. E.I.B.
18. OUR EXPLANATION
19. THE FUTURE
20. BREAK IT DOWN
21. TIME WAITS (FOR NO ONE)
22. I DONT NEED II
23. IT’S ALIVE
24. SCREAM FOR TOMORROW
25. NIGHTMARE
PRAISE FOR BLOOD…
“An exercise in controlled chaos, the energetic numbers present a mesh of frenetic musicianship, the various elements colliding at full speed and dancing in a skittish manner around some notably metallic riffing…this is remarkably fresh, yet also a potent reminder of the vibrant nature of 80s US hardcore.” – RECORD COLLECTOR
“These 10-tracks – from the 90-second rampage of “Poison” to the ambitious, winding of “Only Time Will Tell – show off their skill for mangled proto-thrash solos, mob vocals and limber shifts of tempo. Grohl’s mastering job means it punches harder than most contemporaneous recordings.” – UNCUT
“A victory for punk rock archaeology.” – TERRORIZER
“The results are crisp, dynamic, and far huger than the original’s ’80s production…ballsy as f*ck.” – ZERO TOLERANCE
“With quick enhancement and mixing from Dave Grohl, suddenly the forgotten memory has turned into a modern day lesson in true hardcore punk spirit. From the opening riffs of ‘Only Time Will Tell’ the Santa Cruz band sound timeless, as hauntingly devastating guitar chugging reminds you instantly of why the term ‘legends’ is so often associated with this band. ‘Blood’ is an important hardcore record that couldn’t remain hidden any longer.” – ROCK SOUND
“Blood sounds far more vital and relevant than it should, perhaps because so few modern punk and hardcore bands attack their music with this level of vigour and intensity…These songs simply crackle and buzz with an ageless energy, mirroring the heads-down sh*t-kickery of Poison Idea and Black Flag while boasting a distinctive edge all of their own…this is both a glowing advertisement for 80s punk rock and an admirable demonstration of the importance of curiosity, care and the eternal power of overdriven guitars.” – METAL HAMMER
“Shows a manic finesse that’s several cuts above the so-called masters. There’s a real sense of conviction here as well as an aggressively innovative spirit and it’s to punk’s benefit that these sometimes-ferocious recordings have seen the light of day.” – ROCK A ROLLA

“A great release and its fantastic to see Southern Lord releasing classic bands like this and Poison Idea to whole new generation of record buyers. This is well worth picking up, but if this is your first taste of the mighty Bl’ast! do yourself a favour and get hold of ‘The Power of Expression’ too. You won’t regret either.” – LOUDER THAN WAR