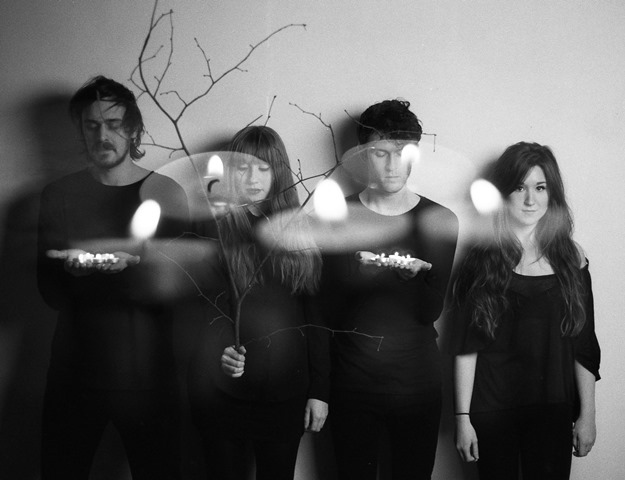 “We love BIRD and are very much looking forward to seeing them play the BBC 6 Music Festival’s main stage this year.”  Lauren Laverne

“An atmospheric slice of dark rock, ‘The Rain Song’ is a richly layered and hauntingly beautiful track.”  The Line of Best Fit

BIRD is the creation of Adele Emmas, Sian Williams, Alexis Samata and Christian Sandford. Hailing from Liverpool, they create dark, haunting yet enrapturing music which will entice you into their otherworldly universe.

After releasing two EPs (one of which was produced by composer and ex-The Coral guitarist, Bill Ryder-Jones) and continually touring the UK, BIRD have gained a large loyal following and garnered praise from all corners, including BBC Radio 1, 2, 3, 6Music and have even been invited to play sessions for Simon Raymonde (The Cocteau Twins/Bella Union).  The Guardian, Metro, NYLON, NME, Q Track of the Day, TLOBF  and Channel 4 are just some who have featured the band.  They recently played at the BBC6Music Festival, and are currently on tour in Europe supporting Rodriguez playing to sold out venues of 3,000!

Support slots with Wild Beasts, Soley, King Charles, PINS, Poltergeist (Echo and The Bunnymen), Stealing Sheep and Rodriguez have cemented BIRD as a formidable live presence.  They were invited in 2013 to play at Festival Number 6, The Great Escape and Liverpool Sound City.

Retaining the atmosphere and dark heart of their early EPs, and combining this with melodic hooks, stark lyrical imagery and intensely-layered soundscapes –  the band utilise instruments such as harp and theremin to add to their unique sound.

‘A War’ is the second single taken from their debut album.

Watch the video to their first single, ‘The Rain Song’  HERE

Their debut album, My Fear and Me will be released on Baltic Records on 26th May 2014.