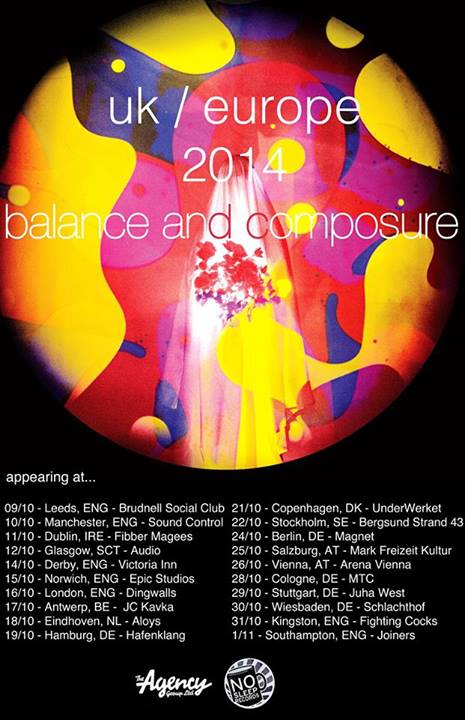 ANNOUCE UK AND EUROPEAN TOUR FOR 2014

Praise for ‘The Things We Think We’re Missing’

“The ‘Things…’ grabs you by the neck, pulls you in and never lets you go” – Big Cheese

After last year releasing the acclaimed ‘The Things We Think We’re Missing’ through Hassle Records, Balance and Composure today announce a full UK and European headline tour for the end of 2014. Their first tour in the UK since 2012 will take in 8 dates across the UK and 11 dates in Europe.

Their second album ‘The Things We Think We’re Missing’ received huge acclaim in the UK on its release in 2013, with a 10/10 from Big Cheese magazine and a 9/10 in Rock Sound. Balance and Composure finished 2014 with Big Cheese naming them Best New International Band in their annual round up and making it into Rock Sound magazines top 10 albums of the year.

The Pennsylvania alternative rock band has recently been touring the United States with Manchester Orchestra and Kevin Devine and The Goddamn Band; and will head to Australia with La Dispute before bringing their live show to Europe this winter.