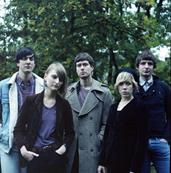 new track stream available ‘You Give Me Love’ from

“Surprising echoes of Richard and Linda Thompson…The soundworld stretches from bucolic flutes to countryish slide and blues. Together they conjure up whole worlds.” Financial Times *****

“a warm-hearted fusion of vintage Americana and English folk-rock, complete with brass fanfares and soaring guitar breaks” The List

‘You Give Me Love’

Live at SEBRIGHT ARMS E2 9AG on 31st May

Following on Two Wings critically acclaimed Love’s Spring come their new album A Wake. Based around the song-writing partnership of vocalist Hanna Tuulikki and guitarist Ben Reynolds, Two Wings are a glorious hybrid of sounds ancient and modern.

Psych-rock guitar is married to the keening whoosh of Tuulikki’s words on an album about love, loss and moving on – but carefully – that has the decidedly grown-up commercial sass of Rumours-era Fleetwood Mac yet retains the edge of Neil Young.

Gift-wrapped in a lush arrangement fleshed out by the accompanying vocals of Lucy Duncombe, the bass of Kenneth Wilson and the drums of Owen Curtis Williams, Peace-Fear is as mercurial as its subject and as soaked with wisdom and experience as all its musical influences that combine to make a four-minute epic of redemption that soars.

Two Wings were formed in 2009 when singer/multi-instrumentalist/visual artist Hanna Tuulikki and guitarist/singer Ben Reynolds finally sat down and wrote a song together after years of crossing paths in Glasgow’s ever-fecund left-field music scene(s).

Tuulikki’s experimental song-based project Nalle was described by Wire Magazine as “easily some of the most convincing free-folk the UK has ever produced”. Tuulikki was also a member of free form jazz folk ensemble Scatter and the Family Elan.

Reynolds’ numerous releases as a solo artist include the 2009 solo guitar album How Day Earnt Its Night, released by New York’s Tompkins Square Records. Reynolds was also a guitarist in critically acclaimed psych-folk band Trembling Bells, and has collaborated with Alasdair Roberts and Baby Dee.

Two Wings release their album ‘A Wake’ via Tin Angel Records. They headline London venue Sebright Arms on 31st May along with more UK tour dates to be announced.