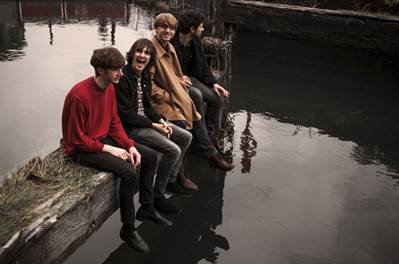 You can stream Marbles here:

Get By is the debut album from TOWNS due June 2nd from Bristol’s much lauded DIY label Howling Owl Records. The album is available physically on limited vinyl and cd as well as digitally from online retailers

In keeping with this DIY affair Get By was recorded in Bristol with friends and fellow label mates Dom Mitchison (Velcro Hooks) and was mastered by Oliver Wilde, with additional help in the early stages by Hugo Bishop (Oliver Wilde). The album also features appearances from Robin Stewart (The Naturals), Dom Mitchison (Velcro Hooks) and Richard Clarke (Scarlett Rascal) on penultimate track ‘Everyone’s Out’. The album artwork was taken by girlfriend and former member of GuMM Lily Cook.

Get By sees childhood friends TOWNS create a spaced out suburban escapism that combines the experimental guitar sounds and DIY aesthetics of psych and shoegaze with the melodies of 60s and 90s guitar pop. Seeing the excitement of rock’n’roll as a way to escape the everyday humdrum of growing up in Weston-super-Mare, they believe in the beauty, glamour and power of ‘proper’ pop music.

Already in their short career TOWNS have experienced many highs and lows and know how volatile the music industry can be. Being lauded by NME as a best new band of 2011, based purely on two demoes before they had even played their first show, to their former booking agent running off with over £1000 of the bands money, virtually crippling the band, to the high of working with legend Owen Morris (Oasis, Verve), only for the label paying the bill to get swallowed up by a major. It’s been pretty eventful but TOWNS are proud to be finally sharing their debut album with you.

Nothing beats the fun of touring so the band constantly tour. TOWNS have had the pleasure to play alongside Paul Weller, Spiritualized, The Twang, Toy, Eagulls and play the following shows in support of the record.

Finch’s “Say Hello To Sunshine” (’05) Out on Vinyl June 10; Now Available For Pre-Order‏