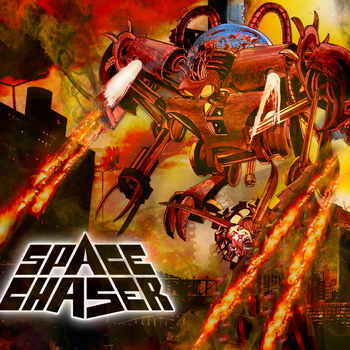 Formed in 2011 through a shared appreciation of Anthrax, Metallica and Agent Steel – along with a liking for hi-top sneakers, skateboards, zombies and cheap booze – the Berlin based quintet have built an impressive following around their no nonsense approach to banging heads, necking bottles and starting parties in the dearth of good parties. As witnessed earlier this month when the band took their wares to the world with an exclusive video premiere of ‘Wastecrawler’ on Terrorizer.

Their debut album Watch The Skies incorporates two rerecorded songs from last year’s Decapitron EP (the EP title track and now LP title track ‘Watch The Skies’), ‘Thrashold’ and seven brand new tracks. Every pinched harmonic a winner for fans of the genre whether the band is keeping the tradition alive or just doing their own thing is anyone’s guess but one thing is for sure, Space Chaser are far from being your average Germanic/Teutonic thrash metal throwback. Produced by Harris Johns (Sepultura, Sodom) this is a record that oozes a snotty charisma and one that is packed with hook after hook of amphetamine-fuelled anarchy. It’s a record about alien invasions, hazardous waste and modern day maschinenmenschs rolled out against a backdrop of excellent riffs, rhythmic guitar duels, wailing vocals and chemically peddled drum fills.

Fans of Destruction, DRI, Tankard, Exodus and Overkill will do well to listen up. Make no mistake, Space Chaser are out to tear fair-weather metallers a new one so get on side or get out of their way. Watch The Skies will be released in the UK on 5th May 2014, and throughout the rest of Europe on 12th April.