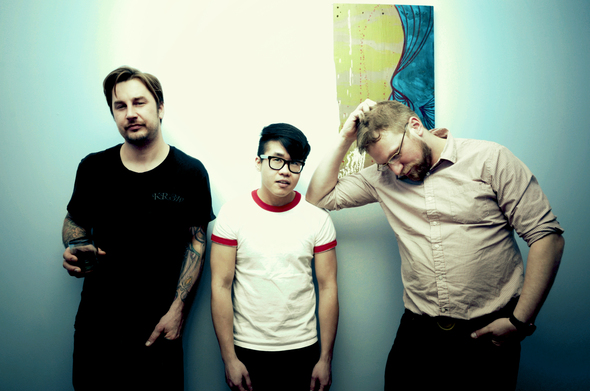 Jersey City, NJ indie rockers Coy Kids will release their debut LP Youthful Days digitally on May 6th through emerging Los Angeles based label, Texiera, with distribution via The Orchard.

The trio will also release a 7” featuring the tracks “Cold & Afraid” and “Girls From New Jersey” which should be available around the release date.

Youthful Days is now available for pre-order on iTunes.

Coy Kids consists of Johnny Chlup on bass, Chris Weber on drums (not the basketball player…Weber with one “b” never forgets how many timeouts he has left) and Shen Pan on vocals and guitar. Are they a power trio? How dare you! Indie rock? Meh. Emo? Nope…only one of them wears skinny jeans and only two of them own a Sunny Day Real Estate record and it’s Diary. So if you were to pick a genre (dirty word alert!) to describe their sound, what would it be? Tweecore? Perfect. What is tweecore? It’s the combination of twee and core. Duh! (Fun fact #1: Tweecore was invented in 1989 when Calvin Johnson (yes, the football player) met Henry Rollins after a Tulalah Gosh show and discussed making music together over a meal consisting of vegan head cheese and foie gras.)

Coy Kids formed in early 2012 when Shen and Chris began playing music together in order to escape the boredom and apathy resulting from normal day-to-day life in Jersey City. They met Johnny and soon learned that he shared their love of New Jersey, day drinking, and dick jokes. They began playing random basements, weddings, bar mitzvahs and bars in the Jersey City area. (Fun fact #2: Chris’s father was Johnny’s high school principle! They were both unaware of this fact until Chris tried to give Johnny detention one drunken evening by locking him in a 4 door Mazda sedan and a sense of familiarity ran through both their veins.)

Artists ranging from Pavement to the Reigning Sound to Quicksand influence the individual band members. But the music they create together isn’t a mere combination of the aforementioned artists. In actuality, they sound absolutely nothing like any band you can think of. Go ahead and give it a try. I promise you’ll fail. Instead Johnny’s bass lines, Chris’ drum beats and Shen’s guitar and voice combine to form a charming and catchy blend of soft/loud dynamic love songs. Some would describe them as anti-love but how’re you supposed to know what love is if you’ve never been jaded and heartbroken? (Fun Fact #3: Shen once dated the daughter of the inventor of Post It Notes!)

There’s one word that comes to mind when you listen to a Coy Kids song: empathy. That’s because they’ve: loved, lied, given, stolen, helped, hurt, fucked up, done good, wished they were older and wiser, yearned for their youth, experienced happy/sad/funny/awkward moments in random places with random people…just like you. These are their stories…these are your stories…these are everybody’s stories.

1 Absolutely Not.
2 True!
3 Nah. That fun fact was based on the movie Romy and Michelle’s High School Reunion. The real girl’s father owned a stationary store and wasn’t nearly as awesome as Romy or Michelle.
4 True!