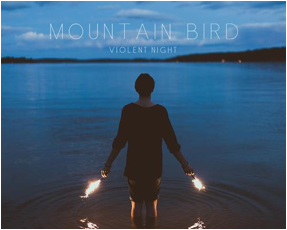 New single out 6th April via

The band have well and truly succeeded in producing an epic track which shows touches of absolute brilliance. I can only imagine what they sound like live – Artrocker Magazine

Mountain Bird are an ambitious dream-pop act hailing all the way from Stockholm, Sweden. Having just being signed to Universal Music Group, they are about to release their highly anticipated second single Violent Night. The track is written, arranged and produced by their lead man, Adam Öhman, and is beautifully performed by his band consisting of: Anders Erlandsson Öberg, Victor Jonsson, Dennis Fyhr and Sam Ekberg.

Violent Night is a beautiful follow-up on the debut single Don’t Mind and comfortably continues the path set by it.

The song starts with an epic intro, which straight away sets a nostalgic and valiant atmosphere. Resembling Sigur Rós and M83 at their best, it is a grand sonic experience from start to finish.

Distant and ethereal production filled with atmospheric layers of guitars, pianos and synthesizers, is a signature sound of Mountain Bird. The ever so present eerie hauntology and concentrated pop splendor make Violent Night yet another successful sonic journey to the outer space and back. Despite the changes in the rhythm, every passage feels very natural and free, and keeps moving bravely at its own pace.

There’s an overall cinematic and storytelling characteristic that proves Violent Night is simply worth listening and dreaming to, and will be available for sale and download on the 6th of April.

GREYS Stream New Track “Guy Picciotto” via Pitchfork Debut Full-Length If Anything to Be Released June 17, 2014 via Carpark Records Worldwide & Buzz Records (CAN)