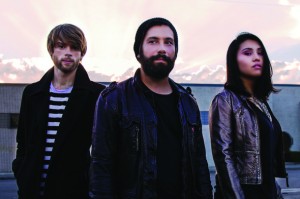 This May, brings Silverlake, Los Angeles, based band Kan Wakan to the UK, to make their debut UK performances and release their first EP ‘Midnight Moon’.

The group’s debut EP introduces their ornate and enveloping amalgam of psychedelic soul, post rock, alternative Americana, noir jazz, 60s soundtrack stylings and orchestral pop; all reshaped and rearranged. HBO have adopted the lead track from the EP ‘Like I Need You’ as the theme tune for their spring campaign trailers.

Kan Wakan crystallized in early 2012, the musical brainchild of composer / producer / multi-instrumentalist Gueorgui I. Linev. The Bulgarian born musician originally set out to create solely instrumental music inspired by his lifelong passion for classical minimalism, but the involvement of chanteuse Kristianne Bautista and producer / guitarist Peter Potyondy rapidly saw the project grow in both scope and purpose.

With a name inspired by the Tagalog (Kristianne’s native language) word for interstellar / outer space “Kalawakan”, the core trio expanded like their titular counterpart to include another four members live.