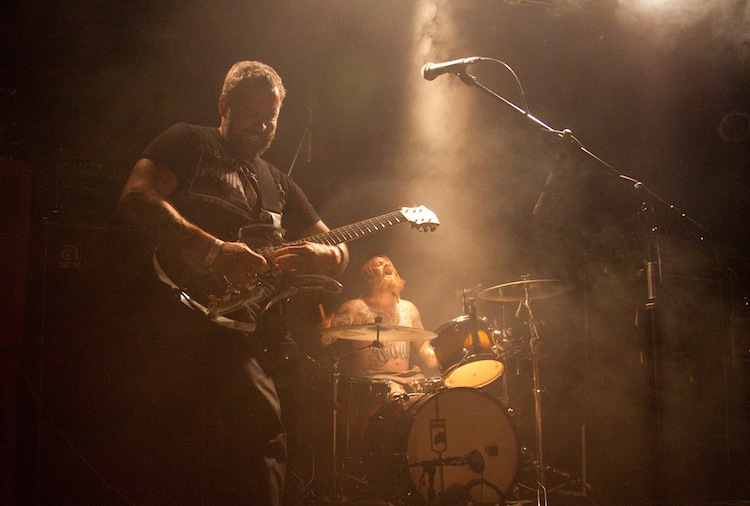 EAGLE TWIN ANNOUNCE UK AND EUROPEAN TOUR DATES THIS APRIL AND MAY
Salt Lake City-based heavy music duo Eagle Twin are force to be reckoned with, merging the immense talents of guitarist Gentry Densley (Iceburn, Ascend) with the thunderous percussion of Tyler Smith (formerly of Form of Rocket). Riff seekers in the UK and Europe can bask in their heavy rituals, here are the dates…
Fri 25.04.14    MelloMello, Liverpool, UK.
Sat 26.04.14    ‘kin Hellfest, Eiger Music Studios, Leeds, UK.
Sun 27.04.14    Desert Fest, Underworld, Camden, UK.
Tue 29.04.14    Magnet, Berlin, Germany.
Wed 30.04.14    Rote Flora, Hamburg, Germany.
Thu 01.05.14    Heavy Days In Doomtown, Ungdomhuset, Copenhagen, Denmark.
Fri 02.05.14    Spring Void, Regensburg, Germany.
Sat 03.05.14    StonedGatherings, Glazart, Paris, France.
Sun 04.05.14    Jeugdhuis ‘t Slot, Wortel, Belgium.
Mon 05.05.14    Elfer, Frankfurt, Germany.
Tue 06.05.14    Chemie Fabrik, Dresden, Germany.
Wed 07.05.14    Halle, Hühnermanhattan, Germany.
Thu 08.05.14    Pohoda music club, Plzen , Czech Republic.
Fri 09.05.14    PMK, Innsbruck, Austria. (200)
Sat 10.05.14    Lofi, Milan, Italy.
Sun 11.05.14    Romandie, Lausanne, Switzerland.
Across two full-length albums a concept emerges, and on their latest album, entitled, The Feather Tipped the Serpent’s Scale, the themes pick up right where the band’s acclaimed debut LP, The Unkindness of Crows, left off. In this installment, the crows documented in the first album have battled the sun and were burned back down to earth as black snakes, the concept of the album focusing mainly on the snake and its various mythic and symbolic incarnations. Ultimately, the great ancestral snake is transformed from its lowly beginnings back into a bird soaring upon the thermals. Demonstrating the cyclical nature of being.
The Feather Tipped The Serpent’s Scale was recorded with Randall Dunn at London Bridge Studio (as with the first album), the record boasts some of the most mesmerising and monstrous riff transformations from Eagle Twin to date.
Listen and share the ear-splitting riffs of “Snake Hymn” via soundcloud:

“A glorious demonstration of the group’s new-found strength. Abetted by  randall Dunn’s sumptuous production, the full breadth of their epic songcraft is realized. the blood-curdling instensity of Adan (lorca) and the vast, implacable vistas of Snake Hymn advance the Earth/Melvins sludge paradigm into ever-greater dimensions.” – ROCK A ROLLA
“The viscous and colossal riffage here never spills over into one-dimensional overkill. With a certain dash of mystical resonance granting these gruff hymns a ceremonial ambience, the red glow of these heavyweights’ amp tubes is only matched by the volcanic lava of their racket.” – 4/5 TERRORIZER
“As much Sabbathian riff worship as it was a Melvins-esque percussive bludgeon.” – METAL HAMMER
“Eagle Twin unleash some of the most enormously fuzzy riffs known to humanity, pinning you down as they plod slowly into a mire of oppresive hopelessness. There’s almost something sinister in this being so damn compelling – the sense that these Utah natives are sharing their slow-motion nightmare with you, and making you like it.” – 4K KERRANG!
“The results are mesmerising, at times unsettling…and never anything less than compltely stunning.” – 8/10 ROCKSOUND
“Massive earth-shaking riffs, low, rumbling vocals, tortured lyrical sentiments, and enough dreaery doom to darken the skies above” – BIG CHEESE
“Eagle Twin have assembled many elements which are allowed to coalesce into a very satisfyingly, though-provoking album.” – GHOST CULT