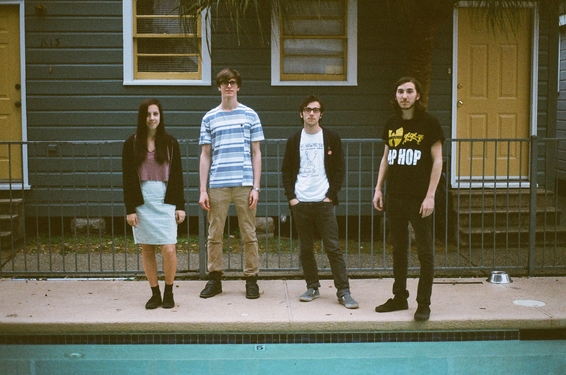 New EP Scary Stories You Tell in the Dark Streaming at Buzzworthy, Out 4/8 via Topshelf Records

April US Tour with Dowsing Kicks Off Next Week

The only scary thing about the new EP Scary Stories You Tell in the Dark from New Orleans indie punks Donovan Wolfington is how damn good the thing is for four people who aren’t old enough to have graduated college yet. The AV Club got it right when they said “Donovan Wolfington recall Weezer’s best moments”, and today MTV Buzzworthy followed suit, stating “At the risk of sounding hyperbolic and melodramatic, “Quitting,” the standout track from Donovan Wolfington’s new Scary Stories You Tell In The Dark EP, is the best song we’ve ever heard!”  You can stream the EP at MTV Buzzworthy in full today in advance of next week’s 4/8 release date on Topshelf Records.
Listen to Scary Stories You Tell in the Dark
The 5-song EP is a perfect example of everything Donovan Wolfington does best, blending sharp angsty-pop sensibilities evocative of bands such as Weezer and Desaparecidos with warbling guitar lines that wouldn’t be out of place on a Thin Lizzy record.  Couple this with the band’s slightly snarky, gritty New Orleans edge and it becomes really difficult not to jump around your living room when you listen.
Scary Stories You Tell in the Dark is currently available for pre-order via Topshelf Records.
Order Scary Stories You Tell in the Dark
Guitarists/vocalists Neil Berthier and Matthew Seferian met at their college freshman orientation in 2011.  When they realized they not only shared the common dream of getting out of college alive but also the problem that everyone else they had jammed with was not trying to rock nearly as hard as they were, Donovan Wolfington was born.  The current line-up also includes Savannah Saxton (keyboards/vocals) and Michael Saladis (drums).
Scary Stories You Tell in the Dark is the follow-up to 2013’s debut full-length Stop Breathing.  For Scary Stories the band enlisted the help of Chaz Sexton to record everthing except the drums, which drummer Michael Saladis recorded himself as well as mixing and mastering the entire EP.
Donovan Wolfington will embark on a brief US tour this month (all tour dates below).
Tour Dates:
4/11/2014    Birmingham, Al @ The Forge
4/12/2014    Nashville, TN @ Neuhau5
4/13/2014    Chicago, IL @ Township
4/14/2014    Grand Rapids, MI @ The House of Pancakes
4/15/2014    Pittsburgh, PA @ The Mr. Roboto Project
4/16/2014    Philadelphia, PA @ Gold Tea House
4/17/2014    Brooklyn @ Death By Audio
4/18/2013    Baltimore, MD @ Charm City Art Space
4/19/2014    Richmond, VA @ House Address
http://donovanwolfingtonmusic.com
http://topshelfrecords.com