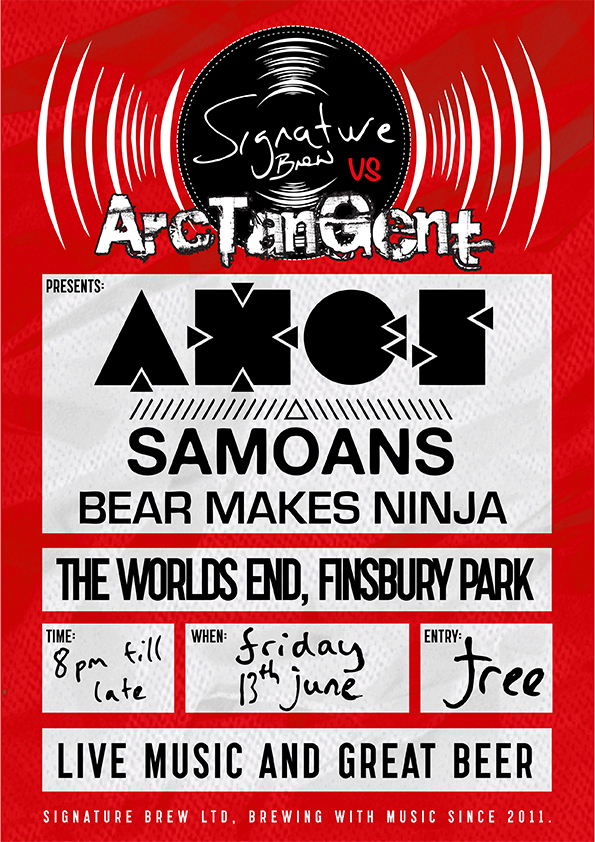 Signature Brew, purveyors of bespoke music inspired beers, ArcTanGent, the UK’s only festival dedicated to the very best music from the worlds of math-rock, post-rock and noise rock and The World’s End in Finsbury Park have collaborated to put on a one off show in London where music fans can come and drink a bespoke ArcTanGent craft pale Ale.

On June 13th the World’s End in Finsbury Park will host an ArcTanGent & Signature Brew Live night. Axes, one of ArcTanGent 2013’s fans favourite bands, will headline the night with support coming from Samoans and Bear Makes Ninja. The night comes with a twist; true music fans and beer lovers can enjoy a pint of ArcTanGent (insert name) Pale Ale which has been crafted by Signature Brew.

David Riley of Signature Brew says, “We have been brewing since 2011, taking music as inspiration, through collaborations with artists and into our own original beers. ArcTanGent share our vision of pairing great music with great beer, so it was a perfect opportunity for us to collaborate and bring something bespoke for fans to drink.”

Goc O’Callaghan says “The hype for this year’s ArcTanGent festival has been overwhelming so working with Signature Brew to put on a live event before the festival will add to the excitement and gives fans a taste of what is to come, in more ways than one! On the 13th June we will be launching the ArcTanGent Pale Ale for fans to enjoy while listening to some of the bands that will be on the bill at this year’s event. Axes were incredible last year so we’re excited to have them come back and play for us at the Signature Brew night, and Samoans and Bear Makes Ninja are a couple of my personal favourites on the line up for 2014!”

The ArcTanGent Signature Brew Live Night takes places on June 13th at the World’s End in Finsbury Park and is free to attend.