“You need to hear this” – Noisey (VICE Magazine)
“Intangibly masterful…darkly muscular indie-rock” – Gold Flake Paint
“Elements of lo-fi and grunge as well as more unexpected shades of The National” – The Fly (Track Of The Day)
“Track of the Day” – Q Magazine
“If you are a fan of rock music then you really should be listening to bands like Then Thickens” – The 405
“A noir-tinged explosion of fuzzed up guitars, driving beats and darkened melodies“- Subba Cultcha
“Satisfying, roaring guitars” – The Skinny 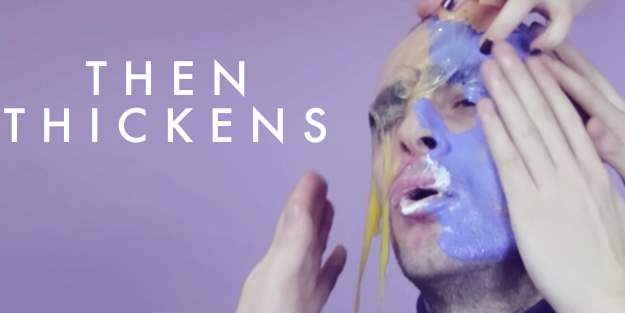 Chorley-based six piece Then Thickens are pleased to be sharing the new video for ‘Tiny Legs’ – the latest track to be taken from their forthcoming debut album ‘Death Cap At Anglezarke’ – after premiering it with Noisey yesterday.

The video is a colourful affair directed by Plastic Zoo and featuring Joe Gilgun, star of Shane Meadows’ film This Is England and cult E4 drama Misfits. The single is released digitally on 21st April.

Recently rubbing alongside stablemates Nine Black Alps as the latest addition to Leeds-based Hatch Records (ex-Brew Records), Then Thickens will be joining them on a UK tour in April after shows with Birmingham band-á-la-mode God Damn and Post War Glamour Girls, following up with an appearance at Live At Leeds Festival – see below for dates.

The band have already revealed the first song taken from the album ‘Restart Your Heart’ and have been pulling in praise from Gold Flake Paint, The Fly, The 405, The Skinny and more with ‘Tiny Legs’, as well as being championed heavily by Steve Lamacq – fellow BBC6 Music DJ’s Jarvis Cocker, Gideon Coe and Huw Stephens collectively lost their marbles too.

Those with keen observational powers may remember front man Jon-Lee Martin from the vaguely terrifying masked noise-mob KONG who released their one and only album ‘Snake Magnet’ in 2009 on Brew Records. Originally starting life as a home studio project from Martin, after some encouragement from close friend Jorma Vik from The Bronx a series of lo-fi recordings appeared online, which proved to be a prototype for the current Then Thickens incarnation. Now years later and with a full band behind him, which includes former Rolo Tomassi member Joseph Thorpe on bass, Then Thickens are now ready to take things further and in a very different direction to previous outifts with their blend of lo-fi slacker pop and college rock.

Following support slots with Biffy Clyro (whose Simon Neil recently praised the band’s “Dirge-y pop music” in NME) and Mariachi El Bronx, the sextet will be hitting the road hard in 2014 with more tour dates and festival appearances to be announced.