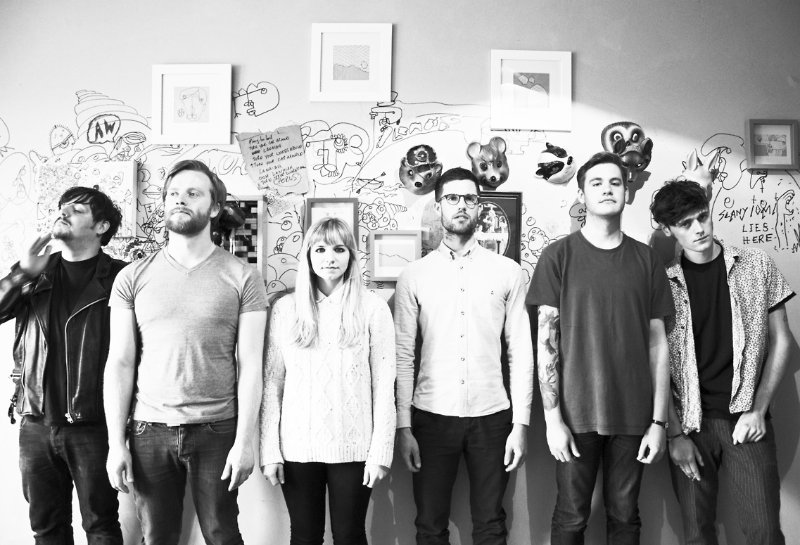 Chorley-based six piece Then Thickens are pleased to be sharing ‘Tiny Legs’ – the latest track to be taken from their forthcoming debut album ‘Death Cap At Anglezarke’ – after premiering it with Gold Flake Paint earlier this week. The single is released digitally on 21st April.

As the latest addition to Leeds-based Hatch Records, the band will be joining stablemates Nine Black Alps as support on their headline UK tour in April, before putting in an appearance at Live At Leeds festival in May (see below for dates).

Then Thickens also revealed album track ‘Restart Your Heart’ last year, which was released digitally on 2nd December and was championed heavily by Steve Lamacq while fellow 6 Music DJs Jarvis Cocker, Gideon Coe and Huw Stephens collectively lost their marbles over it too. The track was accompanied by an authentically retro VHS filmed video inspired by Celebrity Squares, which you can check out here…

Those with keen observational powers may remember front man Jon-Lee Martin from the vaguely terrifying masked noise-mob KONG who released their one and only album ‘Snake Magnet’ in 2009 on Brew Records. Originally starting life as a home studio project from Martin, after some encouragement from close friend Jorma Vik from The Bronx a series of lo-fi recordings appeared online, which proved to be a prototype for the current Then Thickens incarnation.

Now years later and with a full band behind him, which includes former Rolo Tomassi member Joseph Thorpe on bass, Then Thickens are now ready to take things further with their full sound of lo-fi pop meets American rock.

Following support slots with Biffy Clyro (whose Simon Neil recently praised the band’s “Dirge-y pop music” in NME) and Mariachi El Bronx, the sextet will be hitting the road hard in 2014 with further festival appearances and live dates to be revealed soon.