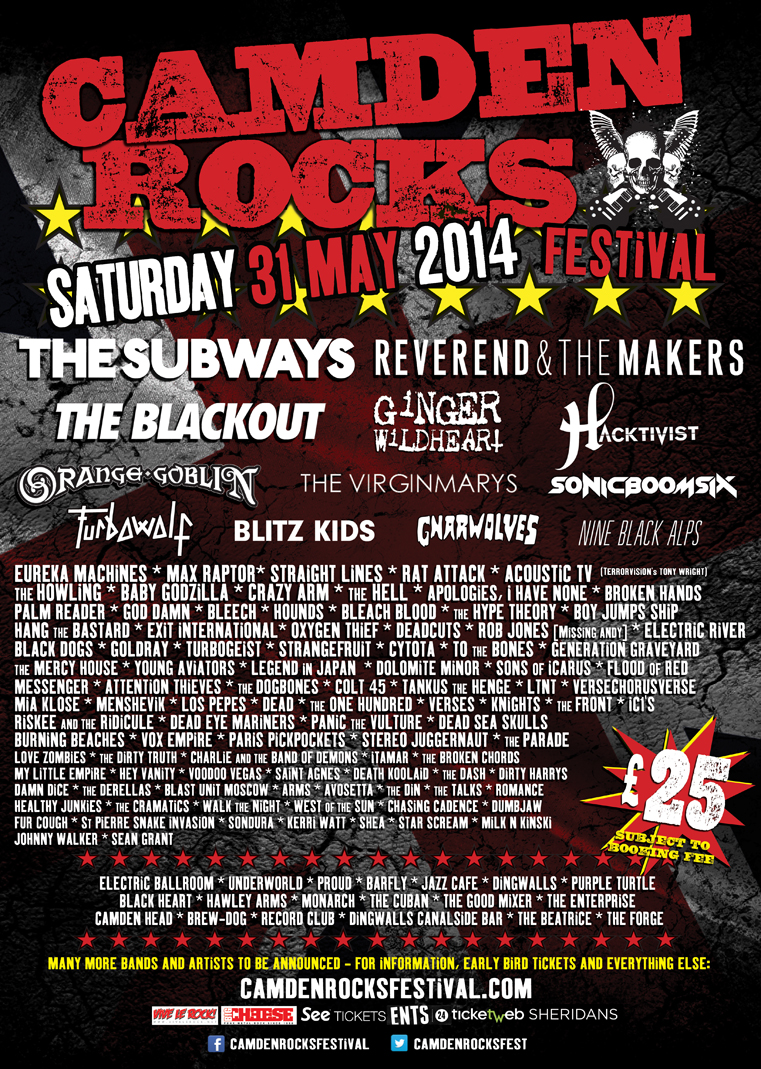 Camden Rocks Festival are proud to announce that British rock power-trio The Subways will be joining the rock n’roll street party that’s going to explode across Camden Town on the 31st of May.

“It feels like ages since we’ve played the UK and what better way to start the comeback than with Camden Rocks,” states bassist Charlotte Cooper excitedly. “The Electric Ballroom is one of the few venues in London we haven’t played and I remember watching bands there as a teenager! We all feel a little like caged animals at the moment and it’ll be awesome to be back on stage again.”

The Subways are joined by recent additions to the line-up, Sheffield indie-rockers Reverend And The Makers. “We’re proper excited to be playing Camden Rocks,” says Jon ‘The Reverend’ McClure. “Always a pleasure to be amongst the cockerneys havin it ! The line-up looks ace too so I’m looking forward to seeing a few bands as well.”

Joining these headliners will be a wealth of new and exciting bands that between them straddle every sound and style across the rock and indie spectrum. Latest additions include The Graveltones, Eureka Machines, Baby Godzilla, The Hell, Rat Attack, Broken Hands, Palm Reader, Oxygen Thief, Boy Jumps Ship, Black Dogs, Healthy Junkies, Fur Cough, Bleach Blood, Goldray, Love Zombies, Mitsubishis, Shiva and the Hazards and Riskee And The Ridicule.

These bands join already announced acts such as The Blackout, Orange Goblin, Ginger Wildheart, Hacktivist and The Virginmarys plus a host of others, see flyer for full details.

Organiser Chris McCormack says “The lineup is really taking shape now, it’s a good mix of all genres of guitar based bands that Camden is renowned for. It’s going to be a great day.”

Camden Rocks Festival is going to be the rock n’ roll street party of the year. Over two hundred of the best new and established guitar bands performing across twenty venues in Camden Town, celebrating everything that is vital, exciting and life-affirming about rock music right now in 2014. It’s a one-mile run of thrilling music all happening on what has always been London’s most rock n’ roll streets.

Last year’s event was a sell-out success with over 150 bands taking over Camden. Bands such as Therapy? The Rifles, Hawk Eyes, Rise To Remain, Turbowolf, Fearless Vampire Killers, The Computers, Lost Alone and many more joined forces with legends such as the Sex Pistols guitarist Glenn Matlock, Carl Barat from The Libertines for a day of essential rock n’roll fun and action.

£25 tickets are now available from the link below subject to booking / transaction fees
www.camdenrocksfestival.com

Over 200 bands for £25 playing in twenty different venues, that’s roughly 10p per band!