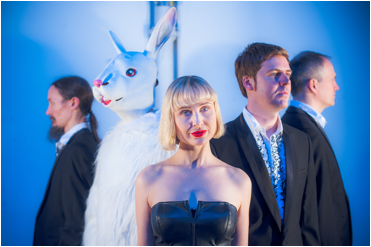 A Band Called Quinn are an art-pop band based in Glasgow. The four-piece have recently been working on finishing the soundtrack to a theatre performance and a live multimedia show called Biding Time (remix). The play explores the role of women, democracy and social change. Biding Time (remix) takes the protagonist Thyme’s name & archetype of aspiring starlet from a shared story and builds a completely new show. It tells one woman’s story of being signed to a major record label.

The lead track from the soundtrack is called Forget About It and has a very fast and raw energy around it. Opening the song with a fully distorted bass blast that soon fades to the back in favour of Louise’s beautiful vocals, is a bold start to any song.

The overall production resembles a mix between Metric and White Stripes, and with a touch of Yeah Yeah Yeahs and Joan Jett, it creates a full on sonic experience for everyone.

Forget About It is a song filled with hooky melodies and arrangements that add flair to the track with its consistency and conviction, and it will be available for sale and download everywhere on the 27th April.

In conjunction with the new single, Biding Time (remix), the multimedia show, is told through song, screen and silent disco headsets, creating an intimate, immersive experience reflecting the personal experiences of the show’s main performer and A Band Called Quinn’s front woman, Louise Quinn. The band will be touring most of May and performing Biding Time (remix) with its full-length soundtrack all over the UK. More information and tour dates below.

15 May The Warren, Brighton Fringe