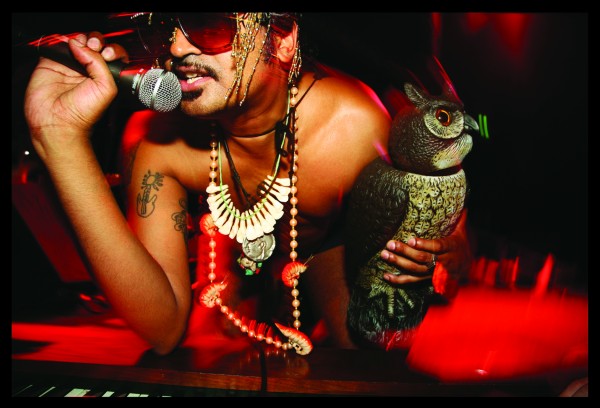 NEW ALBUM ‘IDLE NO MORE’ OUT NOW ON MERGE RECORDS

After receiving world-wide critical acclaim for their new album “Idle No More” (Merge Records) KING KHAN & THE SHRINES are finally bringing their psychedelic soul revue back to the UK and Ireland this April.

The rumours surrounding King Khan range from completely insane to completely believable. Was he really taped to 3 swans as he travelled around the world? Did he lose his mind and join a buddhist monestary? Was he secretly learning Tai Chi from Lou Reed (R.I.P.)? Well the truth is out there!

King Khan has been called a rock ‘n roll saviour and with his Shrines he has built a sound like none other. If your soul needs salvation or at least a little cleansing then let him tear your chest open and devour you as lovingly as possible at the following dates:

King Khan & The Shrines would like to send their thoughts to the family and friends of The Mighty Hannibal who sadly passed away last week. A full statement can be found online at www.facebook.com/kingkhanandtheshrines

King Khan & The Shrines are: