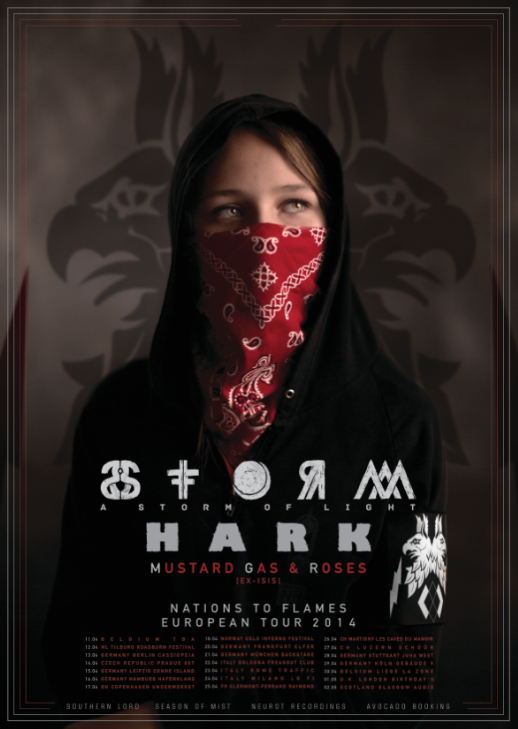 A STORM OF LIGHT, HARK & MUSTARD GAS & ROSES (MGR)
“NATIONS TO FLAMES TOUR 2014”
Through their own unique vision, A Storm Of Light combine the dynamics and the colossal energy of apocalyptic doom and pummelling sludge into the faster and more melodic side of heavy. In September 2013, STORM released their brand new album, Nations To Flames via Southern Lord, centering itself around the apex of human failure and bearing witness to the fall of all governments, all nations, and all religions.
Today we are pleased to announce the “Nations to Flames“ tour across the UK and continental Europe with Welsh power trio Hark and M.G.R (aka Mike Gallagher from ISIS).
TOUR DATES:
11.04.14    Belgium   TBA
12.04.14    Netherlands    Tilburg    Roadburn Festival
13.04.14    Germany    Berlin    Cassiopeia
14.04.14    Czech Republic    Prague    .007
15.04.14    Germany    Leipzig    Conne Island
16.04.14    Germany    Hamburg    Hafenklang
17.04.14    Denmark    Copenhagen    Underwerket
18.04.14    Norway    Oslo    Inferno Festival w/o HARK
19.04.14    Day Off
20.04.14    Germany    Frankfurt    Elfer
21.04.14    Germany    München    Backstage
22.04.14    Italy    Bologna    Freakout Club
23.04.14    Italy    Rome    Traffic
24.04.14    Italy    Milano    Lo Fi
25.04.14    France    Clermont-Ferrand    Raymond
26.04.14    Switzerland    Martigny    Les Caves du Manoir
27.04.14    Switzerland    Luzern    Schüür
28.04.14    Germany    Stuttgart    Juha West
29.04.14    Germany    Köln    Gebäude 9
30.04.14    Belgium    Liege    La Zone
01.05.14    UK    London    Birthday’s
02.05.14    UK    Glasgow    Audio
03.05.14    UK    Bristol    Temples Fest w/o HARK
About Nations To Flames…
Featuring Soundgarden’s Kim Thayil and Indian/Nachtmystium’s Will Lindsay on select tracks, the album was recorded with Travis Kammeyer (OCOAI, Generation Of Vipers) at Fahrenheit Studios in Johnson City, Tennessee, mixed with Matt Bayles (Isis, Soundgarden, Pearl Jam, Botch, Mastodon) at Red Room Recording in Seattle, Washington and mastered by Brad Boatright (Sleep, From Ashes Rise, Nails) at Audiosiege in Portland, Oregon.
“Building crackling conflagrations of doom and thrash that let not a chink of light in.” – UNCUT
“In upping the aggression, intensity and songwriting ability, they are once again overshadowing what’s gone before and giving new reasons to appreciate a band that are already becoming one of the most crucial heavy acts around.” – ROCK A ROLLA
“Concise, brutally to the point…a thrashier and more dense Killing Joke or a more metallic 90s era Ministry.” – TERRORIZER
“The attack is more akin to calculated drone strikes. Cruising more in the realm of Killing Joke and even early Metallica, Nations To Flames drops much of the dirge in favour of directness…in comes taut, thunderous and minimal blitzkriegs that project the same abjectly bleak worldview.” – METAL HAMMER
“Intense is an appropriate word throughout. From the rat-a-tat-tat machine gun snare hits of opener ‘Fall’ and its chaotic background burble of a clashing crowd, there’s a permanent atmosphere of dystopia, the band positioning themselves amongst the chaos to pass judgement on a collapsing society. Close your eyes and all you’re likely to see is blazing buildings and a power struggle on the streets.” – THE LINE OF BEST FIT
“Nations To Flames represents a much more intriguing direction that suits A Storm Of Light far better than anything they’ve previously put their name to.” – THRASH HITS
“Destruction, annihilation, hunt or be hunted, kill or be killed, survivalism, fear and hatred: welcome to the world.” – WHISPERIN AND HOLLERIN
“Nations To Flames is a cunning ingenious leviathan of a confrontation which works on every level.” – RINGMASTER REVIEW
“Nations to Flames is brimming with fantastic songs and never seems to let up.” – SCENE POINT BLANK
“A F*CKING MASTERPIECE!…This is a heavier Storm Of Light on display this time around. The song lengths have been trimmed but have not lost the epic feel, now there is a bruising urgency to proceedings which pummel the  senses with multi-layered, atmospheric slabs of destruction. The guitars are alive with tension and distortion and the riffs sound like empires crumbling under the weight of broken promises. Tempos have been increased giving the songs an undercurrent of controlled frenzy – the tension threatens to spill over into chaos but always the heaviness is present. Tribal drumming underlines the shamanistic nature of the lyrics – repeated phrases hammer home lines into your skull. This should be in everyone‘s album of the year list.” – BLACK INSECT LAUGHTER
http://astormoflight
http://facebook.com/astormoflight
http://twitter.com/astormoflight
http://astormoflight.bandcamp.com