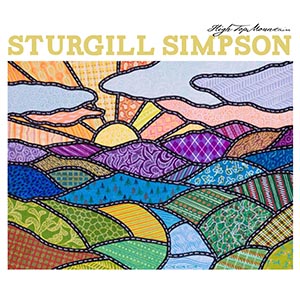 When Sturgill Simpson began recording his debut solo album, he went into the studio with a rather lofty goal in mind: to make nothing less than the purest, most uncompromising, hard country album anyone has made in 30 years.

Uncompromisingly honest, devoid of gloss and fakery, and packed with impassioned vocal performances and world-class musicianship, High Top Mountain heralds the emergence of a formidable presence on the country music scene. Simpson jumped into his new career with only one guiding principle: to always be himself and steer clear of trends. When I sit down to write and sing, he says, what comes out is whats on this record. I cant try to be someone else.

High Top Mountain named after a landmark in Kentucky not far from where Simpson grew up was recorded primarily at Falling Rock, the Nashville home studio of producer Dave Cobb. Further recording took place at Hillbilly Central, the studio favoured by such legends as Waylon Jennings and Tompall Glaser. The album features Country Music Hall of Fame pianist Hargus Pig Robbins and steel guitarist Robby Turner. Says Simpson, Dave told me, If you want to make it sound like the old records, lets get the guys who played on the old records. It was surreal to be sitting in a vocal booth playing guitar and looking through a glass window and theres Pig Robbins in front of you. I had to step up my game.

Kentucky raised, classic country star-to-be, Sturgill Simpson has confirmed that he will play his first ever British shows through January and February. Tickets are on sale now for the following dates :-