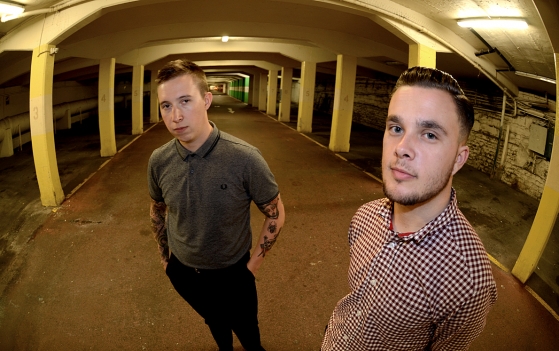 NEW SINGLE ‘WHERE’S YOUR CAR DEBBIE?’ ANNOUNCED FOR RELEASE JANUARY 27 2014 THROUGH FONTHILL RECORDS AND UK TOUR WITH PUP TO FOLLOW IN FEBRUARY

2014 is quickly heating up to become an exciting year for Kent two-piece Slaves. They start the year with the release of the ‘Where’s Your Car Debbie?’ single, released through Fonthill Records on January 27th 2014 as a download and 7” single, to be followed by a UK tour in February with Canadian punk rockers PUP and a special NME Awards Show at the Black Heart in Camden on the 6th of February.

‘Where’s Your Car Debbie?’ is a two minute-twenty second howl of fear as the band find themselves lost in the local woods of Tunbridge Wells, trying to find their friend Debbie’s car, scared that they’re going to get attacked by a Sasquatch/Bigfoot character that has recently been sighted in the area!

“We had agreed to walk Debbie back to her car and the song is about being very very scared of bumping into Bigfoot,” explains drummer and vocalist Isaac Holman. “We’ve had the song in our set for a while now and it has got some good attention live. I’m really excited to see what people think of the recorded version. I hope Debbie is alright with it too.”

Slaves are Isaac Holman (22) on drums and vocals and Laurie Vincent (20) on guitar. They have already played storming shows and tours with Drenge, Andrew WK, Vuvuvultures  and The Skints as well as an incredible set at Reading and Leeds festival in August, the festival appearance was also documented by BBC (link below) and has been followed up with a filmed Maida Vale Session (also linked) and full support across Radio 1 and Radio 6 including Zane Lowe, Huw Stephens and Steve Lamacq who are all now big fans of the young band. The song Beauty Quest (taken from their 2012 mini album ‘Sugar Coated Bitter Truth’) has already been heavily supported by Radio and there’s no sign of relenting as the band complete the year by writing their debut album.

Who knew that only two young men from Kent could make so much noise?

Advance Base (Casiotone for the Painfully Alone) shares ‘Dolores & Kimberley’