Constellation Records welcome Montreal quartet Ought to their roster‏ 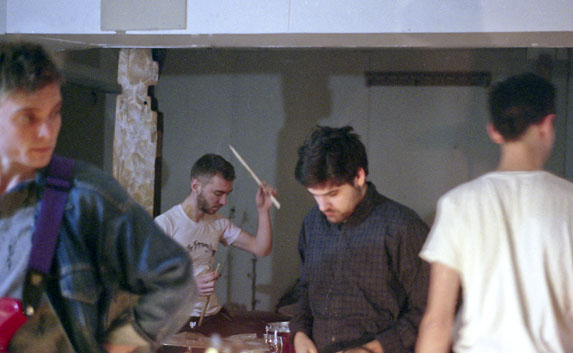 CONSTELLATION RECORDS WELCOME MONTREAL QUARTET OUGHT TO THEIR ROSTER;
LISTEN TO “WAITING” AN EXTRA TRACK RECORDED DURING THEIR RECENT STUDIO SESSIONS

Constellation have today announced Ought as the latest addition to their roster, and there is a debut LP pencilled in for an April release. More on that soon, for now below is the statement from the label…

We are delighted to welcome Montreal quartet Ought to the Constellation roster.

Ought have been living and playing together since 2011. The band emerged from a new(ish) wave of musical ebullience percolating around the far end of the warehouse block on Van Horne in Mile-End, alongside the low-key free jazz happenings, word-of-mouth afternoon noise shows and Solidarity Across Borders benefits we’ve been catching there over the past few years.

The band drew heavy inspiration from the feminist agit-punk collective The Femmaggots, playing loads of shows and taking things out of the loft-scene insularity via the non-profit Loose-Fit show production collective and their efforts to enliven the Brasserie Beaubien dive-bar in Petit-Patrie. They released New Calm, a self-recorded EP, in early 2012. It took us until late last Summer to see an Ought performance for ourselves, and then we were hooked.

Ought delivers an earnest and exuberant post-punk: dextrous and exacting while bursting with propulsive and fluid energy, as indebted to Cap’n Jazz as to Talking Heads. Vocalist Tim Beeler shifts adeptly from a stately, composed oratory to a ragged and impassioned yelp, whip-smart and self-assured but never pompous or alienating. They’re a pretty righteous and humble young band, fiercely dedicated to their friends, their politics and their music, and we’re truly honoured they have chosen to throw in with us.

We will have official news about their debut LP as well as a proper artist page within the next month or so, once we have fully acquainted the band with all the secret handshakes, blood oaths, and the proper technique for car theft. In the meantime, we publicly welcome them to the fold, and invite you to check out “Waiting”, an extra track recorded during their recent studio sessions.

LISTEN TO “WAITING” VIA THIS DIRECT LINK: