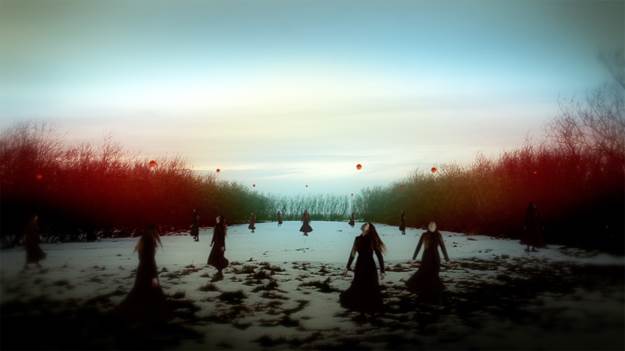 “Contrary to its title, ‘Landlocked’ … has a breezy, island vibe. Packed with surf-guitar riffs and lush production that incorporates synths, saxophone and bongos, the track finds the band at their most existential, dreaming of an endless stretch of blue.” – RollingStone.com

“Staying true to their anthemic form, the band employs lush, robust instrumentation and quite the rousing chorus to create a sweeping, poignant pleaser. “– Consequence of Sound

“The group sidles even further away from its early folk roots and unearths more danceable grooves on this release, as on the sunny single ‘Landlocked.’” – The Alternate Side

London’s own Fanfarlo have a stunning new music video for “Landlocked,” off of their upcoming album Let’s Go Extinct, out February 10th on New World Records. The video is directed by Inga Birgisdóttir and features her sister, Lilja – both siblings of Sigur Ros’ Jonsi – twirling across a desolate, snow-laden field. Despite the wintry visuals, the sunny, pop harmonies of “Landlocked’ will instantly transport you to warmer climates.

Fanfarlo recently announced their upcoming EU tour in support of Let’s Go Extinct. See below for tour dates near you.

PRESS HERE to pre-order your copy of Let’s Go Extinct via iTunes.