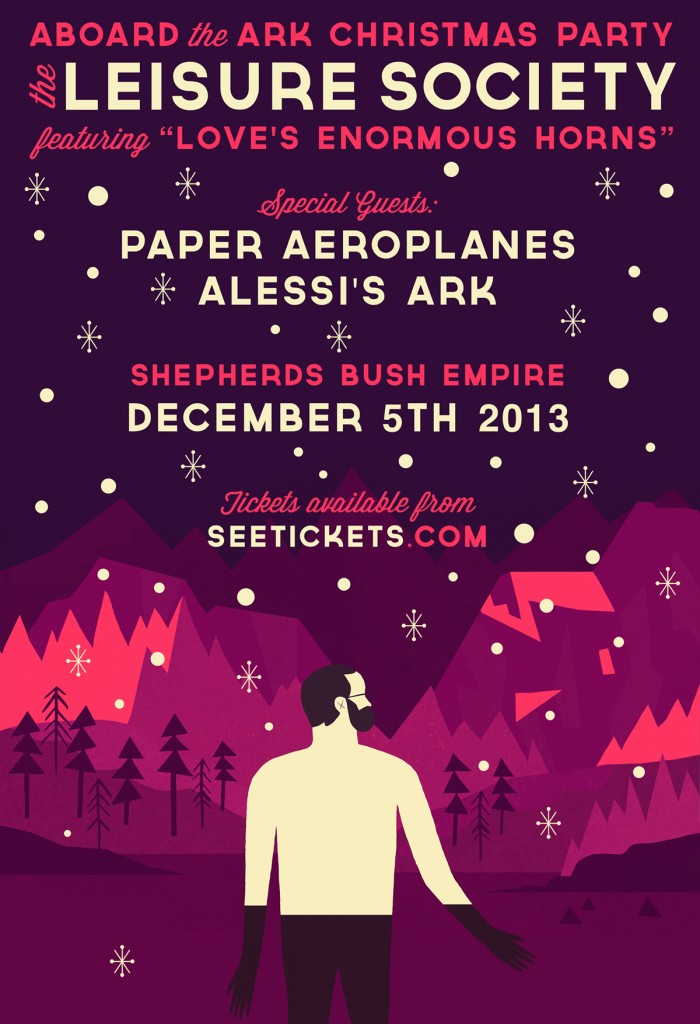 Musically the sun is shining thanks to the third album from this most English of bands- confirmation of what an exceptional talent is their songwriter Nick Hemming– **** Independent
Recalling the bucolic reveries of The Lilac Time, the Burton on Trent band offer upbeat pep (Fight For Everyone) and tenderly weighted waltz-time wonders (The Sober Scent of Paper) – The Mirror
The Leisure Society’s creations are testament to meticulous songcraft CRACK Magazine
Psychedelic flourishes abound The Sun
Sweet lazy indie pop with a vintage touch and a twist of modern talent Metro
The sonorous voices of the vintage instruments used courtesy of Ray Davies‘ Konk Studios come into their own, as does the retrospective nature of the song writing –Drowned in Sound

The Leisure Society have announced details of a competition to find a fan-made video to accompany their new single ‘Tearing The Arches Down’ (out through Full Time Hobby on November 25). The winning entry- judged by the band and BAFTA-winning film-maker Paddy Considine – will be placed on the band’s official VEVO channel and also broadcast on the big screen during the London date of their headline UK tour at Shepherds Bush Empire on December 5, 2013. The live date will showcase material from the double-Ivor Novello nominated band’s acclaimed third album Alone Aboard The Ark (out now), and follows an extensive April UK tour, which included a sold-out date at Queen Elizabeth Hall.  To submit entries to the video competition please upload a video to YouTube and send the video’s URL to info@theleisuresociety.co.uk. The full terms and conditions for the competition are available here: http://www.mediafilesccc.com/TLS_TandCs.txt.

The band and Paddy will be looking for a winning entry with both strong production values and an engaging narrative- the lyrics to the glam sway of ‘Tearing The Arches Down’ itself were inspired by a trip frontman Nick Hemming made back to his hometown of Burton-On-Trent. “I was hit by a wave of nostalgia for all the things that had happened growing up there. Everything looked familiar and yet I felt somewhat alien to my surroundings. Almost nothing had changed but at the same time everything seemed completely different’.
‘Tearing The Arches Down’ is the third single to be taken from acclaimed new album Alone Aboard The Ark (recorded in fan Ray Davies’ Konk Studios), which found The Leisure Society expanding their Baroque pop milieu with ever more diverse orchestration. Having recorded both The Sleeper and 2011’s follow-up Into The Murky Water in home studios, the range of technology at the band’s disposal at Konk proved to be the perfect foil for their ambitious designs.  Alone Aboard The Ark was recorded on a 2“ tape machine and a 1970s mixing desk, and the value of recording live, coupled with the band’s minimal approach to arrangement, is borne out across the album.

The genesis of The Leisure Society spans back to the friendship made by Nick Hemming and Christian Hardy in their hometown of Burton on Trent. When the pair relocated to London they fell in with the Brighton-based Wilkommen Collective, and with Helen Whitaker, Mike Siddell and Sebastian Hankins, came to form The Leisure Society. The single
‘The Last of The Melting Snow’ from their debut LP The Sleeper was nominated for a 2009 Ivor Novello, and the band joined an incredibly select group when a year later, ‘Save It For Someone Who Cares’ was also nominated for an Ivor.