In this special addition to our Rad Releases we take a little twist on our musical endeavors and we talk to local artist Tom Roberts to find out his favorite pieces of the past year. 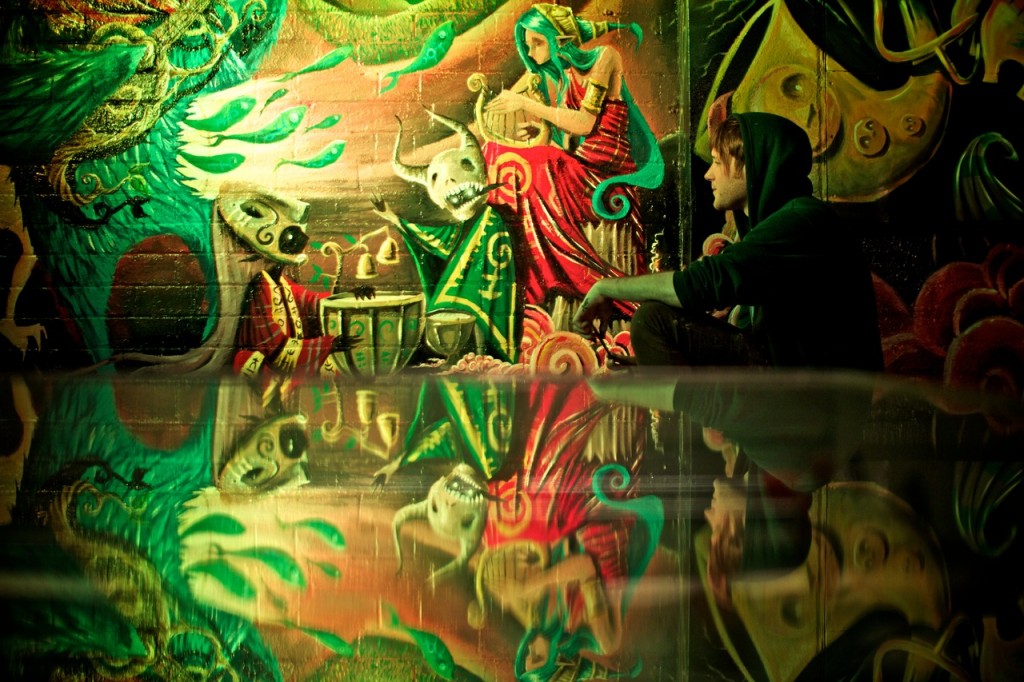 Local artist and friend of Circuit Sweet Tom Roberts, best known for Tom Roberts Illustration has had an incredible year of hard work- with exhibitions, murials, sketch book after sketch book and some fantastic commissions. We’ve had the pleasure in attending a few exhibitions throughout Herefordshire which have showcased Tom’s talents. Tom has a work space within Artsite 3- Artsite3 is a not for profit unit of studios with a diverse community of professional artists and designers located in central Hereford. A variety of single and shared studios are available with access to kilns and communal work spaces. Founded in 2008 by a co-operative of artists, designers and crafts people who pooled their resources to gain affordable studio space, Artsite3 has gone on to support many artists and designers at differing stages of their careers. Housing creatives working in a range of specialisms including illustration, textile design, ceramics, fine art, mixed media and print making, the studio has evolved to become a sought after working environment. It was at their h-ART September showcase which we fell in love with another piece of Tom’s delectable work- his bed commission which you can find more info on below- Mural artist and Illustrator Tom Roberts is heavily influenced by mythology and folk lore. Predominantly using acrylics, oils and pencil sketches, the work he produces is often woven with personal symbolism. We are delighted to hear more from Tom…. 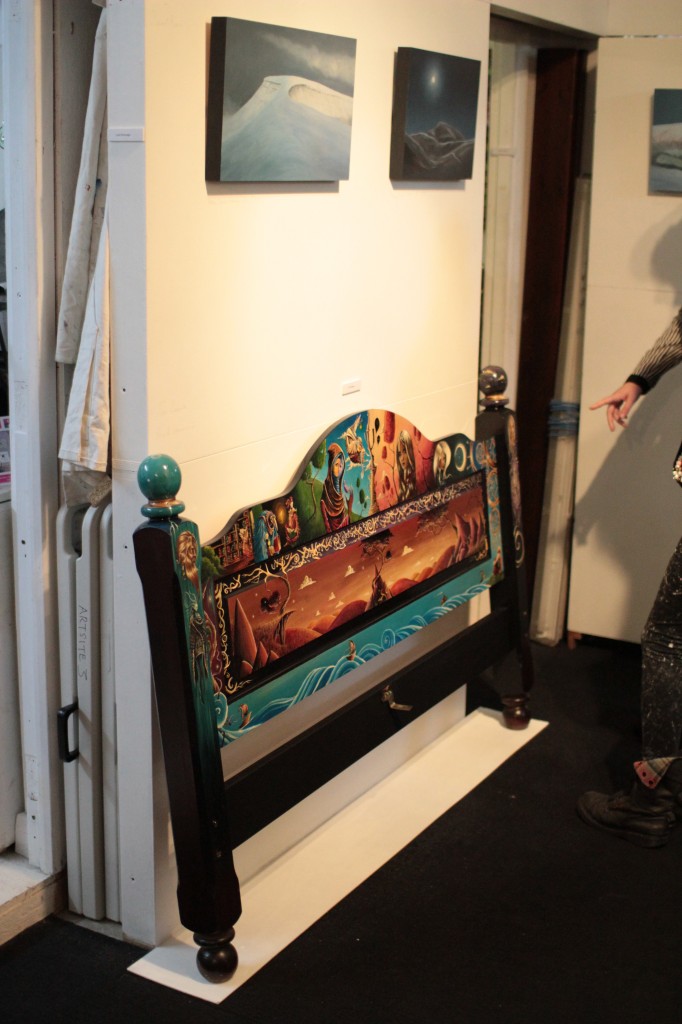 The main commission that comes to mind from this last year is the bed project. I’m used to working on canvas and walls so I approached the bed as I would lots of little canvases all stuck together, eventually linking them as I went along. This seemed to tie into my main thought of wanting the bed to resemble little snippets of dreams. I loved working with the original grain of the wood adding in layers of light and dark. Also turning the bed knobs into orbs of earth, air,fire and water have inspired me to seek out more furniture commissions in future. 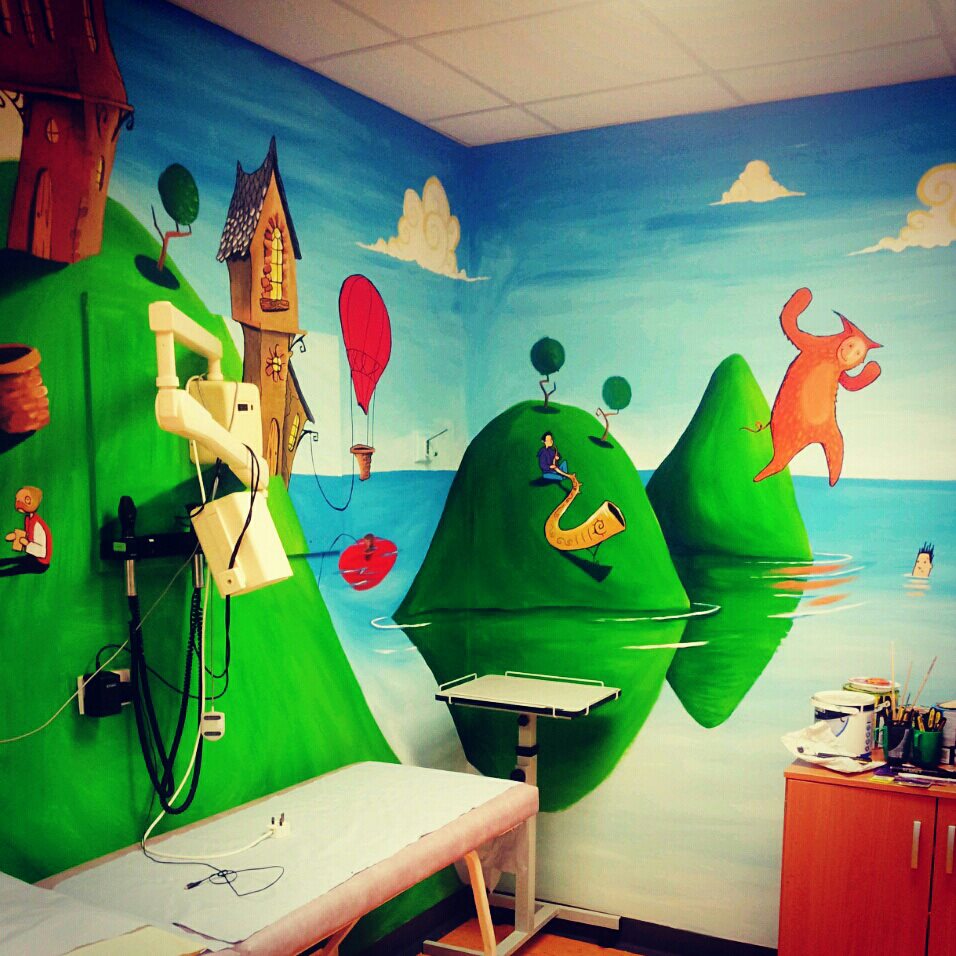 The new sensory room at Herefordshire county hospital was an awesome opportunity to be as creative and bizarre as I liked. Having painted murals over the entire ward (almost every wall) it was fun to break from the theme of sunny cheerful and bright landscapes. To be given a blank room, paint it pitch black and then decorate the cosmos with Galaxies, whales swimming through space, giant cogs holding the moon and stars in place and anything else I could conjure up was incredible. 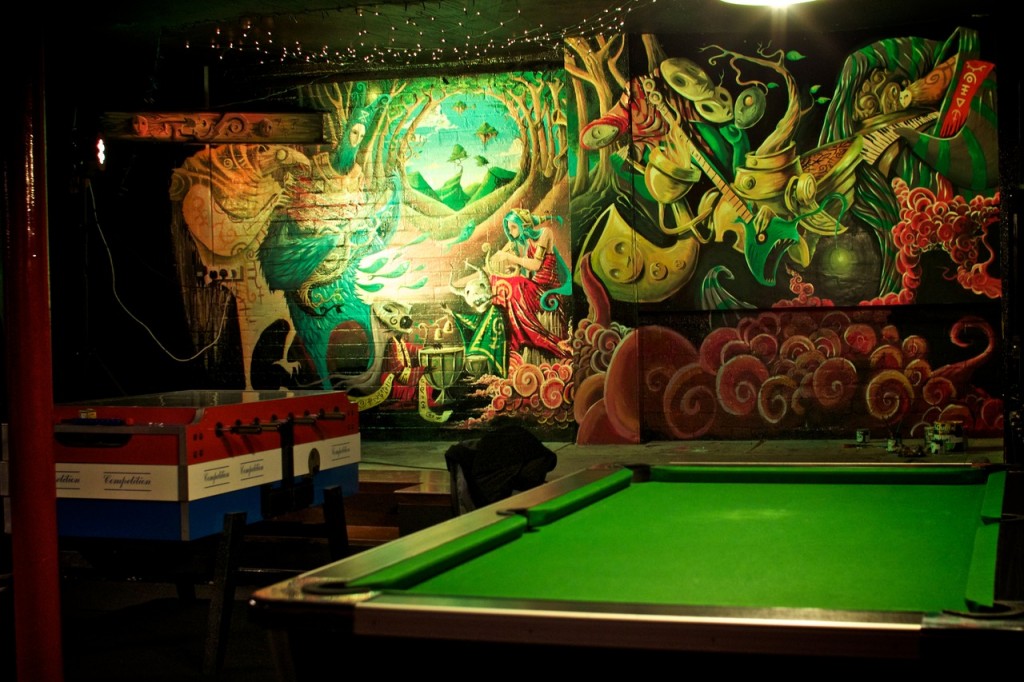 AJs is a pretty cool gig venue, what I can mainly remember from this project was constantly having my headphones in and trying to replicate this strange type of demigod band idea I had in my head at the time. I had full use of the light rig so tried to work it so that different images were visible on different light settings. For me the best compliment I get from that job is when people assume the painted iron beam is a ancient wooden carving. 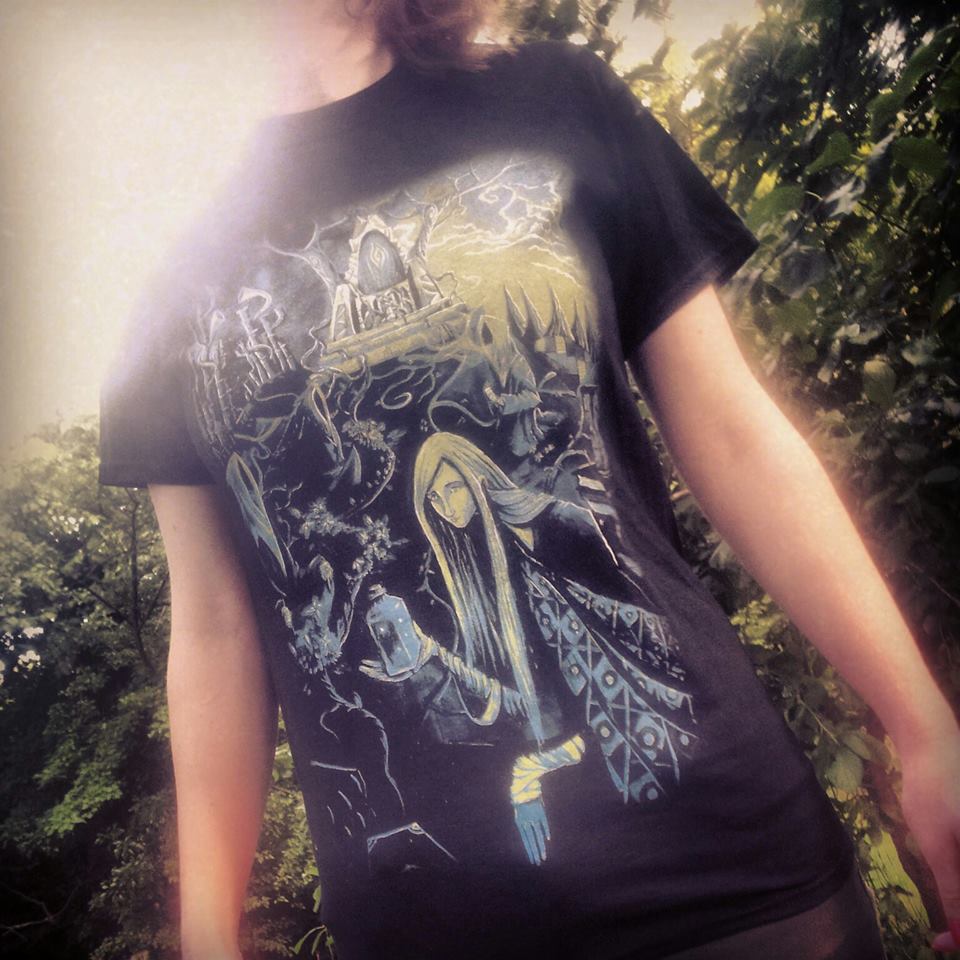 This year I produced merchandise such as cards, prints and T-shirts to sell at Edinburgh Fringe festival.
My Nomad shirt started out as a quick sketchbook doodle until i started struggling to draw up T-shirt designs.
I saw the sketch again and tried it out.
I was actually pretty impressed with how they turned out. All sizes sold out, in the end one large bloke settled for a small just to put up on his wall.

About a year or so ago I attempted to fit as much detail as i possibly could into a canvas, It was called Empire and sold last summer. I think that painting had the most interest out of all my work so far. I was commissioned shortly after to do a second. This is almost twice the size. I have been working on it for the last three weeks and not even a quarter of the way through. I shall be updating progress shots on my instagram and Facebook pages as it progresses.

Unless stated otherwise all images are taken from Tom Roberts Illustration Facebook and Tumblr.
We thank Tom for his artistic take over of Circuit Sweet and look forward to all the fantastic work to come in 2014.