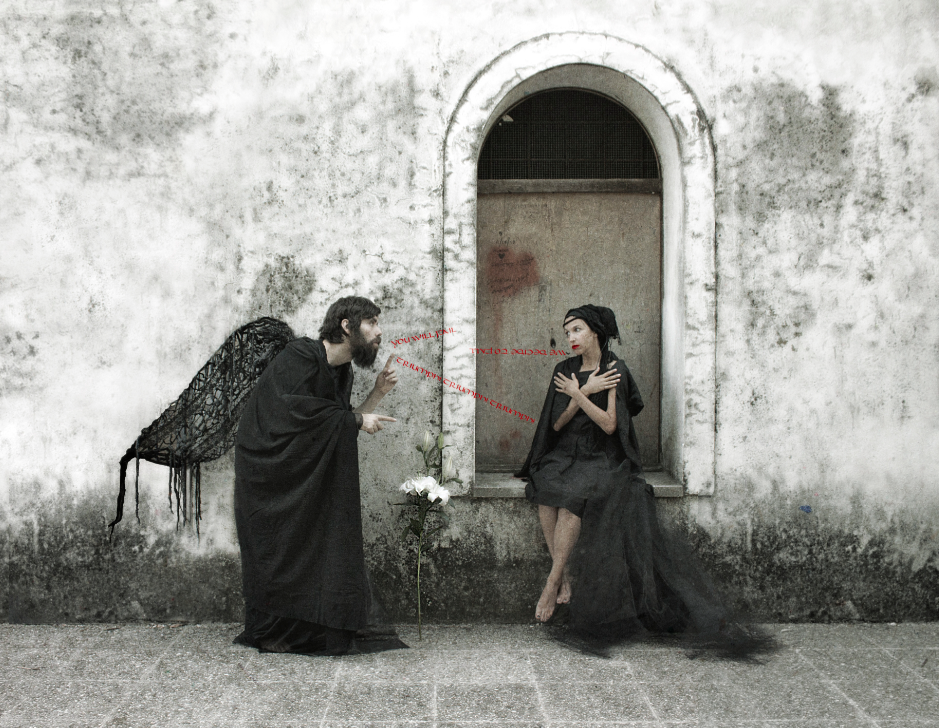 FATHER MURPHY RETURN WITH INTRIGUING NEW EP, PAIN IS ON OUR SIDE NOW,
RELEASED 27TH JANUARY 2014

Father Murphy are a powerful sonic force comprising Rev. Freddie Murphy (vocals, guitar) and Chiara Lee (vocals, keyboards, percussions). Born nearby Venice, Northern Italy, Father Murphy, with three albums and a plethora of EP’s and limited releases, have over the years become one of the most mysterious and enigmatic musical entities coming out of Italy, part of the community that Simon Reynolds called the new “Italian Occult Psychedelia”.
They are back again, and this time their sermon is delivered in an even more bewildering manner. Pain Is On Our Side Now, due for release on Aagoo Records/Boring Machines, is straddled across two single-sided 10″‘s, each containing two movements and intended to be played simultaneously – or maybe not. Father Murphy are not the types to preach the rights and wrongs of participating in their immersive ceremony

For those who haven’t yet delved into Father Murphy’s fold, prepare yourself for a brisk stroll on the wild side, where tortured vocals, magmatic drones, sudden outbursts of the blackest chamber music and tangential bursts of childlike melodies find themselves contentedly holding hands.

Recorded in a Medieval castle at Itri (the same extraordinary place where Zola Jesus and Gary War have recorded), the EP is a concept of sorts, tackling the many virtues of failure, and the chances we may or may not choose to take at all times, every day.

Pain Is On Our Side Now is bolstered by a cast of characters comprising of, amongst others, Gowns’ Ezra Buchla, who sings on ‘They Will All Fail You’, as well as Italian occult Psych master Gianni Giublena Rosacroce who provides clarinet on ‘Let The Wrong Rise With You’, with Greg Saunier from Deerhoof on mixing and mastering duties.

Father Murphy keep wandering off the beaten path in to the undocumented dark, following their personal, almost incommunicable quest for truth and meaning – one foot in the grave, or tongues firmly planted in their cheeks? It is difficult to interpret. You decide.

“Father Murphy delve further into the prog horror sound of 2008 …And He told us to turn to the Sun, with a pounding Gialloesque score that suggests a band who’ve studied Messiaen’s Messe de la Pentecote alongside Os Mutantes and spotted a deep and true connection.” – Andrew Male, MOJO

“I’ll put an extra shilling in the collection plate if Reverend freddie Murphy has been ordained. There’s chanting and banging and bells-a-plenty, a peculiar hymnal to the art of noise. Throughout, the percussions, strangulated sounds, epic song titles and conceptual doom as if the world’s faiths are administering the last rites over the rattlin’ bones of Liars. If the papists hear this, there’ll be excommunication for Reverend Fred. Amen to that.” – Luke Turner, NME

“Compliments to Michael Gira for pointing Dream Magazine in the direction of this intriguing Italian psychedelic outfit… This is definitely a band to keep an eye and ear open for.” – George Parsons, DREAM MAGAZINE

“It is no surprise that Julian Cope is a big fan of this eccentric Italian trio, their second album sounds genuinely gothic but somehow manages to invoke other disparate influences.” – John Lewis, UNCUT

“After their really rather glorious debut it is reassuring to see that this strange Italian troupe have lost none of their experimental verve…If you’ve got an open mind then you might just discover a new favourite band.” – Alex Deller, ROCK SOUND