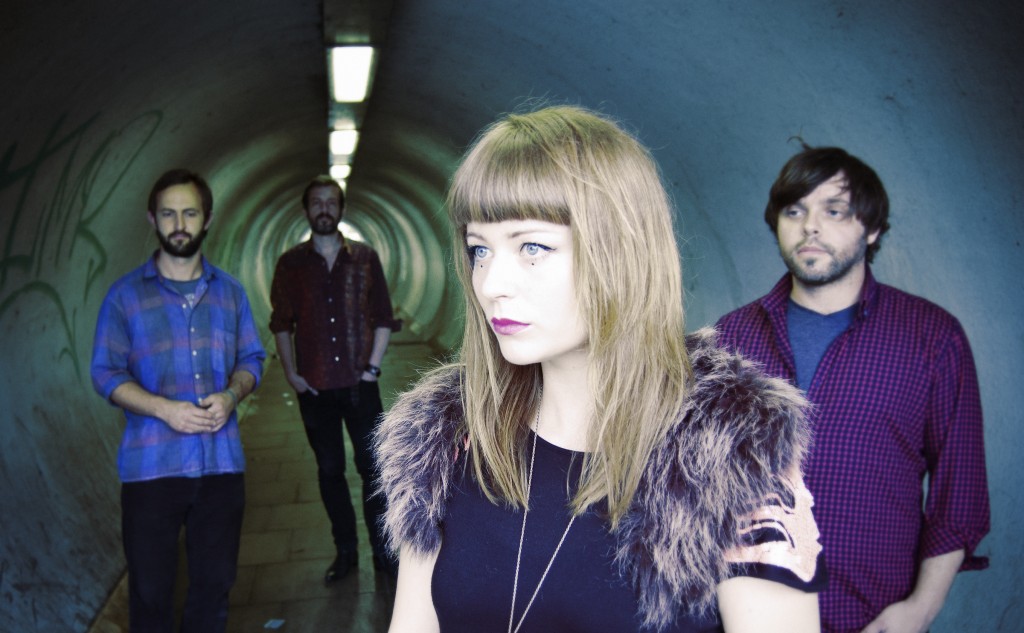 “….something of a cinematic-sounding weepie. Forlorn verses of tentative cymbals and driving bass give way to a gushing wall-of-sound chorus full of stormy emotions expertly” Q
The Fauns will release sophomore album Lights through Invada Records on December 2nd 2013. Lead single In Flames, also released December 2nd, has already been playlisted by BBC 6Music.  The video for Seven Hours – a recent ‘Song Of The Week’ at Q – has been directed by John Minton, the man behind Portishead‘s live visuals and director of Savages‘ recent clip for Husbands – check it out here. The Fauns will be in London to play two gigs around release: Rough Trade East on Weds 4th December, and The Old Blue Last on Thursday 5th.
Lights is the successor to the Bristol band’s self-titled debut album (put out through their own Laser Ghost Recordings label), which, released in 2009 with no promotional muscle, went on to pick up radio support from 6Music’s Steve Lamacq and shift over five thousand copies purely by word of mouth. The organic success of The Fauns also garnered a valuable champion of the band in the form of Hollywood soundtrack composer Clint Mansell, (Moon, Black Swan, Requiem For A Dream) who remixed the album cut ‘Fragile’ for a limited edition Record Store Day 12”, all 1000 copies of which sold out in under a day.

Produced by the band’s own Michael Savage and engineered by well-respected Bristol figures Jim Barr and Tim Allen, Lights pits the barely-there vocals of front-woman Alison Garner (Hyetal) against guitar work which is by alternate turns both all-consuming and intimate. Whilst the shoegaze-indebted elements of the band’s sound still shimmer as brightly as they did on The Fauns, Lights finds them imbued with new purpose- see the instrumental squalls which punctuate album stand-out ‘Seven Hours’, or the interlocking guitar figures of ‘4AM’, resonating with the atmospheric tendencies of the XX. Michael Savage’s exhaustive knowledge of film & sound-tracking permeates Lights; ‘Point Zero’ and ‘Rise’ are sequenced as ambient episodes in homage to the astral soundtracks of Moon and Solaris (created by band heroes Mansell and Cliff Martinez), whilst elsewhere a rather more overt nod is made to film scoring with the motor engine-sampling crescendo of the Tron-esque ‘Let’s Go’.
The Fauns recently toured with French synthwave pioneer College, having previously supported The Pains of Being Pure at Heart, Anika, The Telescopes, Savages and Ulrich Schnauss. With an extensive major city European tour alongside French post-rockers Alcest (at the band’s personal invitation) already confirmed for early 2014, and headline dates to be announced later this year, Lights may well see the full realisation of the burgeoning success of The Fauns.
The Fauns are: Alison Garner (vocals), Lee Woods (guitar), Elliot Guise (guitar), Michael Savage (bass) and Tom Adams (drums)

Post-Ape Unveil New Video For ‘The World is Over’