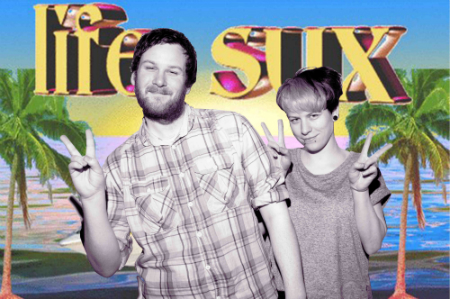 London’s BITCHES have unveiled a new video for track ‘No Brain’.  The London best friend duo BITCHES have released a music for “No Brain” off of their self released and self titled debut album. Directed by Dan Rowan of Foot Village, the video captures the simple fun of the group. Colorful fun chasing piñata monsters through the streets and picnics in the park. And, of course, smashing them to bits.

When photos surfaced from BITCHES’ first performance in Los Angeles, it was a bit of a revelation. Swarms of teens, unfazed by swelteringly hot rooms, moshing and crowd-surfing with abandon. How did an unknown band from London step into the brick walled building of the Smell and instantly turn a bunch of strangers into complete animals? While BITCHES’ sound is very well calculated for power, there is also a genuine sense of friendship infused into every chord progression and vocal melody. A sense of friendship that turns their distortion laced roar into a mutual howl of kinship, between both the members of this duo and with their audience. Living and writing their music in London, but yearning for a rural life that seems to escape them, Blake and Staz are best friends turning potential frustration into empowerment. With streamlined compositions that they let dip in and out of a chaotic feedback wall, the metaphor of being the small but confident voice escaping the meaningless clutter of urban living, is intentionally thin. This is the sound of being young and hopeful despite the odds. A sound that invites the listener to join in, without apology.

BITCHES have toured the US 4 times, including performances at SXSW. They have also performed at numerous fests in the UK, Ireland, & Macedonia. Previous releases have appeared on Deathbomb Arc and the Fat Cat imprint Palmist. This will be their first full length album. It is self-titled and will also be self-released. Released October 28th, on vinyl & digital.

“When BITCHES get angry they want you to know why.” – RCRD LBL

“Amazing punk… Can someone get me British citizenship?” – Vice